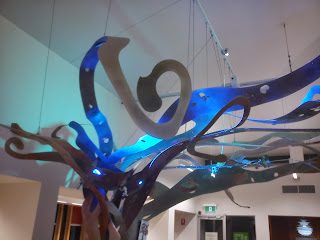 EldestOne entered a story in the Campbelltown Literary Awards competition (the links to the actual stories will be up by Friday they say).

It was a free-wheeling science fiction story,  I thought it rather good (although I'm his dad, so that doesn't count, but the part where Tasmania rose out of the ocean and launched itself into space was pretty hilarious).

Well, the judges thought it okay as well, and he won Silver in the Youth Writer (15-24 years) section. Not bad for his first competition. The Deputy Mayor read out the précis of his story with relish.

EldestOne is off holidaying with the rest of the family while I stay here and mark exams (sad face), so I gave him the good news by phone, and impersonated him for the photo's I also conveyed the part of one of the judges speech where she emphasised edition and revising (evil grin).

Now if I can just convince MiddleOne that his art is fine.