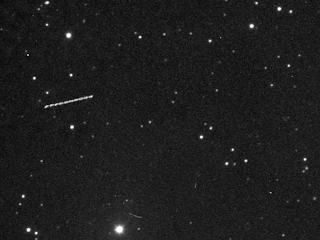 2012 QG42 image using the iTelescope T5 instrument on 7 September 2012. This is a stack of 10 x 120 second images. The images were stretched in FITSliberator, then stacked in ImageJ and a Max intensity Z project made, then despeckeled. The Images seem to have variations in brightness which may indicate it is rotating. I'll have to take another set and do proper photometry on them. Click to embiggen.

And here's Peter Lake's video sequence from the same night.

Southern Skywatch September 2012 Edition is now up.
The Sky This Week - Thursday September 6 to Thursd...
Things You Need To Do Before Announcing You have F...
Aurora happening in Tasmania NOW!
Carnival of Space # 265 is here!
Mars, Saturn and Tiangong 1 (2 September 2012)
I have the Best Family (Fathers Day Edition 2012)
Carnival of Space #264 is here!
Blue Moon Tonight
Blogging suspended, at Bill Bailey Concert