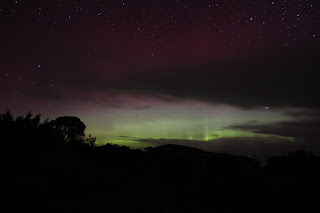 In Australia, despite bad weather, aurora were seen in Tasmania and as far north as near Bega in southern coastal New South Wales. The disturbances lasted all through the 16th, with aurora still going on in Tasmania tonight, and a report from Perth.

As with last time, all through this the IPS site carried on as if no aurora were happening at all.

Again  there are some fantastic images from the Tasmanians.

From the 15th
Julie Head captured some light pillars in this lovely image from the Forth Valley.
Ian Stewart got this amazing panorama at the boat launch at Tinderbox overlooking Bruny Island. And here is his video.
Maureen Johnston's beautiful image was taken at Howden.
Nick Monk got a nice one from Lymington.
Julien Johnson captured some great colours with this shot.
Katinka Smith blogs the aurora (with pictures)
Paul Albers got this shot from his back veranda in Victoria (not Tasmania)
Loic Le Guilly has some really good images here.
James Garlick has put together a brilliant panorama.


From the 16th
Ivan Hinojosa Toledo caught aurora AND the International Space Station in this stunning shot from Tinderbox.
Jenne Jackson got this shot from Whites Beach.


Images from the June 19 aurora are here and here.

Comments:
I'm very jealous of Paul Albers - Melbourne was completely clouded out until I went to bed at around 1:30am. I would love to know where in Vic he was.

Fantastic! Thank you so much to everyone who shared their photos, and to Ian for keeping us up to date with everything. I'm in NSW and although photos never bring the full wonder of a live experience these came close. Thanks again! :)