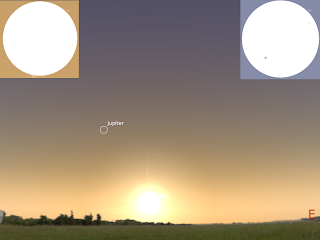 Morning sky on Wednesday June 6  looking north-east as seen from Adelaide at 7:45 am local time in South Australia showing the  Sun. The left inset shows the appearance of Venus seen telescopically at this time with Venus just entering the Sun's disk. The right inset shows the appearance of the Sun and Venus near maximum transit. Similar views will be seen elsewhere at the equivalent local time (click to embiggen)


Partial eclipse of the Moon June 4.

Venus is lost in the twilight, then on the 6th crosses the suns disk in a historic transit, not to be repeated until 2117. Venus reappears low in the morning sky near the Hyades and Aldebaran. Venus is close to the crescent Moon on the 18th.

Jupiter is low in the morning sky, on the 17th the crescent Moon and Jupiter are close.

Mars is close to the Moon on the 26th.

Mercury enters the evening sky, on the 21st Mercury and the thin crescent Moon are close.

Preparing for the Transit of Venus?
Partial Lunar Eclipse Monday June 4, 2012
Write Your Name in Galaxies
On the Radio Yet Again!
Okay, so How do I Point My Telescope at the Sun fo...
Carnival of Space #251 is Here.
The Sky This Week - Thursday May 31 to Thursday Ju...
A Step by Step Guide to Making a Binocular Project...
Amazing Messier Object Images
Waxing Moon, Sunday May 27