The First Quarter Moon is Saturday March 31. This is a "Blue" First Quarter Moon, the second in the month. Daylight saving time ends. Venus is easily visible in the western evening sky close to Jupiter and the Pleiades cluster. On April 3 Venus is closest to the Pleiades. Mars is in the eastern evening sky, not far from the bright Star Regulus. On the 3rd the Moon is close to Mars and Regulus. Saturn is in the late evening eastern sky near the star Spica. 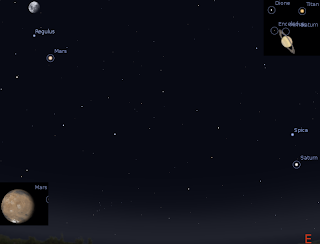 Evening sky looking east as seen from Adelaide at 8:00 pm local time on Tuesday April 3 showing Mars, and Regulus and the Moon forming a line. Saturn is nearby near Spica. Similar views will be seen elsewhere at the equivalent local time. The inset shows the telescopic appearance of Mars, Saturn and it's Moons at this time. Click to embiggen.

Mars is in the constellation of Leo. It is the brightest object in the north eastern sky, and its distinctive red colour makes it easy to spot. Mars is rising before sunset and is at its highest in the northern sky around midnight.

Mars moves closer to the bright star Regulus in Leo, on April 3rd the waxing Moon, Regulus and Mars form a nice line.

Saturn is above the north-eastern horizon, not far from the bright star Spica. Saturn is high enough in the northern sky in the early morning for telescopic observation, but is rising about 7 pm local time. 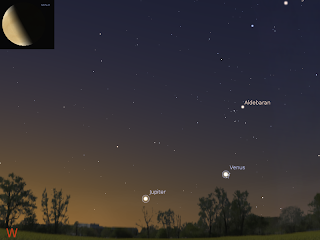 Evening sky on Tuesday April 3 looking west as seen from Adelaide at 6:45 pm local time in South Australia showing Venus next to the Pleiades cluster and Jupiter nearby. The inset shows the appearance of Venus seen telescopically at this time. Similar views will be seen elsewhere at the equivalent local time (click to embiggen)

Bright white Venus and Jupiter are readily visible together in the evening western twilight sky from around half an hour after sunset for around an hour and a half.

Venenters Taurus this week and is drawing away from Jupiter. Between the 2nd and the 4th of April Venus is close to the beautiful Pleiades cluster, being closest on the 3rd.

However, Jupiter is still a good binocular object. Jupiter is visible until around 7:30 pm local time.

With Mars just past opposition and Saturn rising, there are lots of interesting things in the sky to view with a telescope. If you don't have a telescope, now is a good time to visit one of your local astronomical societies open nights or the local planetariums.

Carnival of Space #242 is here.
March 22 has Come and Gone...
Venus, Moon and Jupiter, 26 March 2012
Venus, Moon and Jupiter, 25 March 2012
I'm an iTelescope Science Advisor
Another 15 minutes of Fame
First Pass of Mosaic with C/2009 P1 Garradd and M81
Dance of the Planets II, Venus, Jupiter and the Cr...
My First Image of Supernova 2012aw near M95
Earthquake in Oaxaca and Heavy Mass Objects