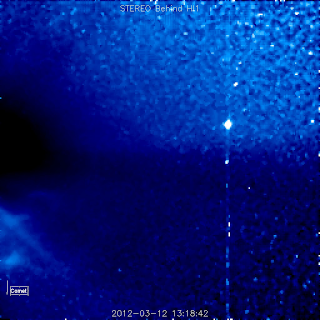 Is this Kreutz comet seen in the STEREO H1B imager (low resolution beacon image, first piced up by Rob Matson) the SWAN Kreutz comet? (Actually, yes it is, as I was putting this together Karl Battams posted an update identifying the same object).

Whether it will get bright enough to see with the unaided eye like Lovejoy is an open question. While reasonably bright in the STEREO beacon images, it is not as bright as Lovejoy was.

There are still not enough data points to determine the comets orbit with high accuracy.

Follow the story of the comet over at the Sungrazer Comet site, and at the SOHO comet watchers site.

Video of 20 frames of the H1B low res beacon images. The comet is at the bottom left in the last few frames, entering a coronal mass ejection.

Comments:
Aye that must have been another lizard (tailed star or comet up there) to meet the sun in the astral. I read it somewhere that, the sun (& the man) is eliminating these & other creatures that appear near him these days, and the lasco c2, lasco c3 images are clear & healthy these days.

One of our associate been to meet him, and confirm these strange revelations.

And everyone must now be aware, that we might be disturbing someone out there, by following these reports.

Strangely, when most people identify their chosen dieties with the sun but are praying to the creatures for help. And these days, people are somehow against the sun for no reason, and do beg everywhere in the name of the sun.

This conflict and our own faith in the conflicting versions of the same heavens is absurd.

Did you google for "Apollyon Mc'Risen" lately. The revelations were surprising, and he has left many little notes floating on internet.

And since most people are allergic to the space invaders, who arrive as these creatures, It would be best to stay away from these reports.