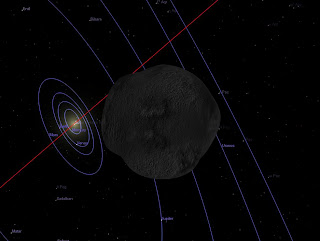 Rob McNaught is the Energizer Bunny of comet hunters, his most recent discovery is 2012 DR30, not a comet, but a Transneptunian object (TNO), one of a large cohort of icy planitesimals that creep on from the outer dark to the relatively toasty climes of Neptune's orbit.

Rob's find is roughly 150 Km in diameter, and is currently at its closest to the Sun, at 14 AU away (one AU is the average distance of the Earth from the Sun). It's also a relatively bright (for a TNO) magnitude 19, which is 26 times fainter than the faintest star we can see with the unaided eye, and a bit of a challenge to all but serious amateurs and professional astronomers.

What has this small lump of ice and rock got to do with Nibiru and 2012? Well, unless you have been living under a rock, you would be aware that 2012 is the focus of numerous fears of astronomical catastrophe. One of these fears centres around the mythical planet Nibiru. Supposedly either a Super Jupiter or a Brown Dwarf, Nibiru is allegedly in the inner solar system, somewhere between the orbits of Jupiter and Mars, heading for a close encounter with Earth. 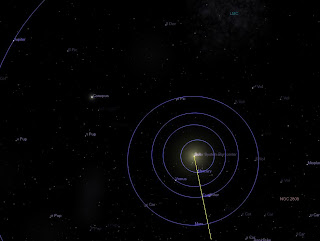 The latest alarm comes from Terral Croft (Terral03), who claims that in March 22 this year there will be a magnitude 9 earthquake affecting the Pacific Rim. This will be due to a combination of the alignment of the Earth, Sun, New Moon, the constellation Leo and an alleged "Heavy Mass Object" (his version of Nibiru) on the equinox. He bases his prediction on the claims of Mensur Omerbashich (which I have refuted here and here), and his own 188 day cycle.

The basic idea is that every 188 days, roughly coinciding with the equinoxes, the line-up with Leo produces strong earthquakes (magnitude 7 or greater). The March equinoxes produce the strongest earthquakes, because they also line up with the "Heavy Mass Object" (more about this later).

On his page he talks about "winding back" 188 days from the March 2011 Fukushima earthquake and there's the September 2010 Christchurch earthquake. Then wind back another 188 days and there is the February 2010 earthquake.

As well the actual dates of the earthquakes can be up to two weeks away from the equinox. Not a very convincing "alignment". 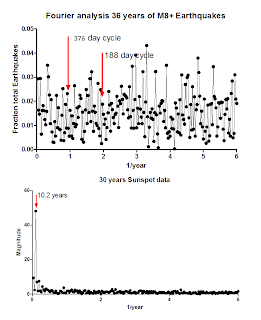 Well, I've looked at this a couple of ways. I'm my original discussion of Mensur Omerbashich's ideas, I did a Fourier analysis of Earthquake frequency from 2000-2010. Remember that Fourier analysis is the standard way to pick up cyclic events out of noisy data. If earthquakes are more common every 188 days, we should see a peak at 188 days.

In fact there is no peak. Maybe it's only the M8+ earthquakes with the 376 day cycle that are more frequent. So I redid my Fourier analysis on 36 years of M8+ earthquakes (the earthquake data can be downloaded here)

Again, we see no peaks at all (see image to the top left). The red arrows indicate where peaks should be if they existed, but we see nothing but noise.

When I did this on 30 years of sunspot data, a very noisy data set with only 3 peaks, Fourier analysis clearly showed a peak of 10 years, not far from the long term average of 11 years (click on the images to embiggenthem). 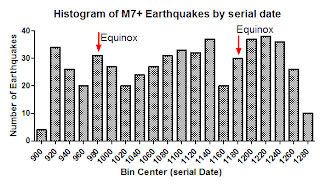 Fourier analysis is a very sensitive way to find cycles, but not everyone will have access to the tools needed to replicate my work. So I've also run the data through Excel in a couple of different ways that anyone can duplicate in Excel or Google Docs.

First I did a histogram of all M7+ earthquakes, I did this using the daynumber function in Excel (previously I used a clunky function to generate the Julian Day, but day number is simpler and gives us serial days from the horrible number format the earthquake database uses). First I looked for earthquakes clustering around the equinoxes, as Terral claims. You can clearly see that there is no clusters around the equinoxes. 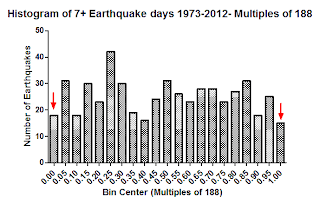 Secondly, I looked for earthquakes clustering in multiples of 188, "winding back" from the Fukushima earthquake as Teral did. 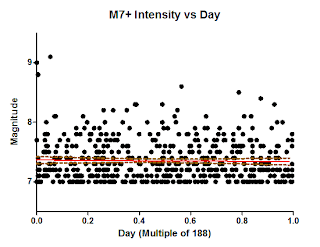 Terrals 188 day rule is an illusion, a chance alignment between two dates that is of no significance. There will almost certainly be a magnitude 7 earthquake during March, since we have on average 15 of these a year, but a magnitude 9? Not likely.

Since the 188 day rule is an illusion, what about the "Heavy Mass Object" that was supposedly involved?

Somehow something reputed to be 4 times (or more) the size of Jupiter, as close as, or closer than Jupiter, is invisible to the battalions of amateur astronomers relentlessly scanning the skies for comets, asteroids and supernova, while a mere 150 km ball of rock and ice can be picked up well outside Saturn's orbit.

Apparently Terral has his own "astronomers" who he claims are tracking this alleged object. But no images or ephemerides have been forthcoming so other other astronomers can check for themselves. The only available image of this "Heavy Mass Object" is a fake, faked using one of my images.

There is plenty of amazing things in the sky at the moment, but not giant doomsday planets.

Postscript: I'm completing this the day after the anniversary of Fukushima, while my eldest son is on study tour in Japan. If you would like to contribute the the rebuilding, please donate here.

UPDATE: This article has had a sudden spike in hits in the wake of the magnitude 7.4 earthquake in Oaxaca.

So, no a magnitude 7.4 earthquake in on March 20 does not validate Terrals' prediction.

Comments:
Methinks thou dost protest too much. Simple math does not a case make. But, given the catastrophic nature of these predictions, the part of me that wishes the world to continue sans disaster hopes you're right.

To clarify my comment just a bit, to create a statistical analysis of all earthquakes over a period of however many years obscures the pattern that is, supposedly, only relatively recently applicable, in the last few years, at the most. Why don't you try the same analysis since, oh, let's say, the Elenin psyops campaign? See if there is any significance to it then?

a) Terral himself claims this is part of a pattern stretching back to the '60's, which is why I used the 1970 on data set (rather than the 1900 on data set).
b) I've already done the analysis of the shorter data set, I explicitly mention the 2000-2010 data set and link to it in the article above (which also analyses all earthquakes 7+ etc from 2000 to the last available ones just before the articles were published).

You have certainly done your homework. Your down to earth explanation is soothing to my ears. I relax in the calmness of your message.
But if this isn't true, then, the earth itself is stepping up its earthquake activity; both in quantity and quality.
Things are not the same. There seems to be a lead-in to something bigger. So many earth changes are expressing themselves now.

My approach to it has been to attempt to explain the log 10 scale to those that mistakenly think that a magnitude 7.4 quake is "just a little bit less" than a 9.2 quake.
The difference is 10^9.2 / 10^7.4 times, or in other words, a 7.4 quake would have to be SIXTY-THREE TIMES WORSE in order to equal the severity of a 9.2 quake.
Log scales seem to be difficult to grasp.