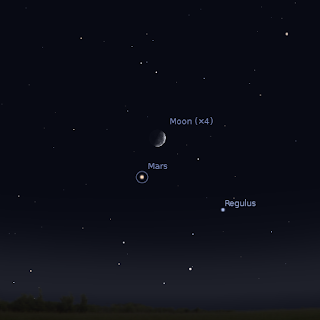 Morning sky looking north-east as seen from Adelaide at 5:00 am local daylight saving time on Saturday October 22 showing Mars, the waning Moon and the brighter stars. Similar views will be seen elsewhere at the equivalent local time. Click to embiggen.

The New Moon is Thursday October 27.

In the morning Jupiter low is above the north-western horizon.

Mars is low in the north-eastern morning sky, in the constellation of Leo. Mars nears the bright star Regulus over the week. On the morning of Saturday, October 22, Mars and the waning Moon are close together.

Comet 45P Honda is in the morning sky, but will be very hard to see in the twilight sky without a decent telescope.

Saturn is lost in the twilight glow. 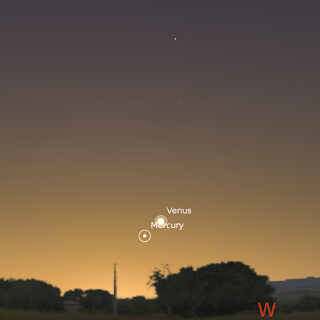 Bright white Venus is now is now readily visible low in the evening western twilight sky from around half an hour after sunset for somewhat over an hour.

Mercury is visible below Venus at the beginning of the week, and becomes more prominent, and closer to Venus, as the week wears on. Both planets climb higher in the evening sky over the week.

There are lots of interesting things in the sky to view with a telescope.If you don't have a telescope, now is a good time to visit one of your local astronomical societies open nights or the local planetariums. 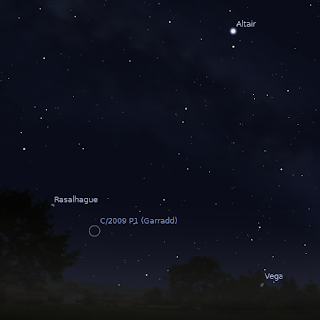 Comet C/2009 Garrad is visible in binoculars in the north-western sky, in the constellation of Ophiuchus.

Although it has brightened substantially, it is still only a fuzzy dot at magnitude 6.5. The best views will be under dark skies, where you might spy a short faint tail.

The best viewing is around 9:00 pm, when the sky is dark enough to reveal the comet, even thought it is coming closer to the horizon. By the end of the week the window for observing the comet is narrower. 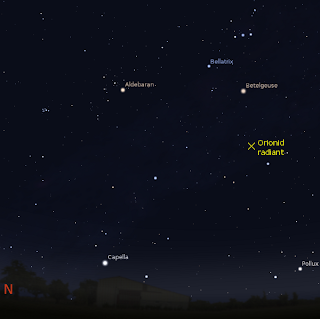 The location of the Orionid meteor radiant (yellow cross) as seen looking north-east at 3:00 am October 23 local daylight saving time from Adelaide. Similar views will be seen at equivalent local times elsewhere.

The Orionid Meteor shower peaks on October 22 at 13h UTC, (around midnight AEDST) in Australia, the radiant for the Orionids rises around 1 am on October 23, with the best meteor viewing being between 3:00 am and 4:00 am. You can expect to see roughly a meteor every 5 minutes or so under dark skies.

You can use the Meteor Flux Estimator to predict the number of meteors you might see at your location. Choose 8 Orionids, and make sure the date is 2011 and you have DST on if you are in daylight saving zones.