The Full Moon is Wednesday October 12. Venus is low in the western evening twilight. Jupiter appears in the evening sky and is close to the Moon on October 13. Mars is visible in the morning sky in binocular distance of the Beehive cluster. Comet C/2009 P1 Garrad is visible in binoculars in the north-western sky. 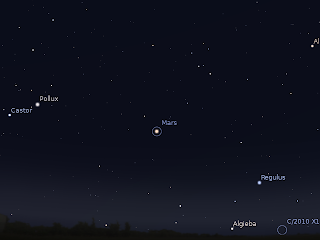 Morning sky looking north-east as seen from Adelaide at 5:30 am local daylight saving time on Sunday October 9 showing Mars and the brighter stars. Although the simulation shows comet Elenin, if there is any remnants of this comet they will be too faint to see. Similar views will be seen elsewhere at the equivalent local time. Click to embiggen.

The Full Moon is Wednesday October 12.

In the morning Jupiter is above the north-western horizon. Now is a good time to begin telescopic observation of this massive world, or follow its moons in binoculars.

Jupiter is visible in the evening sky, from about 10 pm local time on. However, for good telescopic observation Jupiter is best from 12-2 am. On Thursday October 13 the Moon is close to Jupiter.

Mars is low in the eastern morning sky, in the constellation of Cancer. At the beginning of the week Mars is within binocular range of the Beehive Cluster.

Comet 45P Honda is in the morning sky, but will be very hard to see in the twilight sky without a decent telescope.

Bright white Venus is now visible low in the evening western twilight sky. You will need a clear level horizon (like the ocean) to see Venus. Look around half an hour after sunset.

Mercury returns to the evening sky and should just be visible below Venus by the end of the week.

Saturn is lost in the twilight glow. 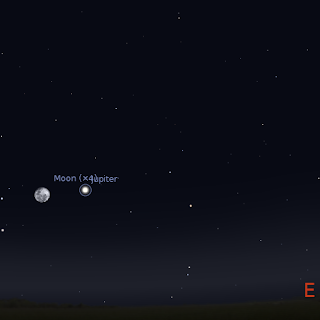 Evening sky on Sunday October 13 looking east as seen from Adelaide at 11 pm local daylight saving time in South Australia showing Jupiter and the Moon. Similar views will be seen elsewhere at the equivalent local time (click to embiggen)

There are lots of interesting things in the sky to view with a telescope.If you don't have a telescope, now is a good time to visit one of your local astronomical societies open nights or the local planetariums. 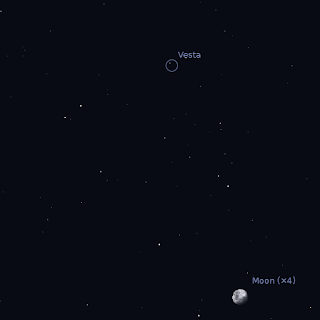 The location of Vesta as seen at 8:00 pm on Saturday October looking north from Adelaide, similar views will be seen at equivalent local times elsewhere. Click to embiggen,

The asteroid Vesta is well past opposition, but is still visible in binoculars (magnitude 7). However late in the week increasing moonlight may make it difficult to see.

Vesta starts the week below the relatively bright star Phi Capricorni, making it very easy to find. During the week moves further away from Phi Capricorni. 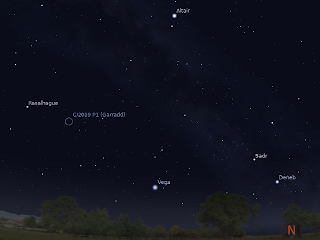 Comet C/2009 Garrad is visible in binoculars in the north-western sky, in the constellation of Hercules.

Although it has brightened substantially, it is still only a fuzzy dot at magnitude 6.9. The best views will be under dark skies, where you might spy a short faint tail. The best viewing is around 8:00 pm, when the comet is still high in the sky. By the end of the week Moonlight will make viewing the comet difficult.

Comments:
Hi - Chris from Perth. I have been dazzled by what I think is Jupiter last night. Stunningly bright.

I'm not a regular observer, just like looking at the stars now and then - but last night 6 October around 11PM Perth time as I was putting out the bin, there it was.

First thought was Venus, but then I thought, get a grip, it's nearly midnight. Then I thought NOVA! Dug out my ancient DOS Skyglobe program from 1992 and found Uranus and Jupiter up there. It seemed closer to where Uranus should have been, but Wiki says Jupiter is actually third on the list after the moon and Venus, so that must have been what I was looking at.

Anything special about this time of year/cosmic time for it to be that bright? Or perhaps just local atmospherics? I grew up in a small town in Namibia with little light pollution, but I have never seen a planet as bright as Venus up there - I'm positive.

Thanks Ian, I'm sure we're not the only people who appreciate your work !

I showed my family Venus last evening. A friend said "how do you know that's Venus" I should have said "Ian told me" ;-)