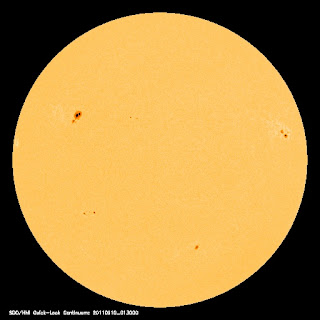 The Sun has been readily blasting off powerful flares for the past week, with particularly powerful X class flare on the 8th (some great images at Spaceweather) .

Most of these are from sunspot 1283 (cluster at far right on the image). These have not translated into aurora, not really being directed at Earth.

There is an geomagnetic alert for Australia tonight from a more Earth directed coronal mass ejection, whether this will translate into either a geomagnetic storm or aurora is hard to say.

Certainly people in Tasmania and Southern New Zealand should be on the lookout for aurora this evening (Saturday September 10), but the bright Moonlight will make observing any aura difficult.

Supernova 2011fe in M101 Nearing or at Maximum Bri...
Carnival of Space #213 is here.
The Sky This Week -September 8 to Thursday Septemb...
For the Astronomer who has Everything (Part 2)
Leonid Elenin on the Break-up of Comet Elenin
For the Astronomer who has Everything
Will the Fragments of Comet Elenin Rain Doom upon ...
Southern Skywatch September 2011 Edition Up
Comet Elenin in STEREO H1B (August 25 and 26)
Latest C/2010 X1 Elenin News