The Sky This Week -September 8 to Thursday September 15

The Full Moon is Monday September 12. Jupiter appears in the evening sky and is close to the Moon on the 15th. Mars is visible in the morning sky. Saturn is low in the western evening sky. Comet C/2009 P1 Garrad is visible in binoculars in the northern sky. 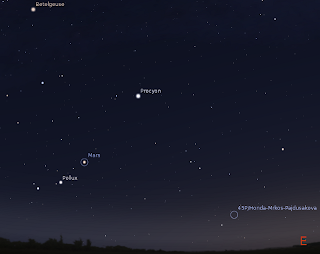 Morning sky looking north-east as seen from Adelaide at 5:30 am local time on Sunday September 4 showing Mars, the brighter stars and the location of comet 485P Honda. Similar views will be seen elsewhere at the equivalent local time. Click to embiggen.

The Full Moon is Monday September 12.

In the morning Jupiter is high above the north-western ern sky. Now is a good time to begin telescopic observation of this massive world, or follow its moons in binoculars.

Jupiter is visible in the evening sky, from about 11 pm local time on. However, for good telescopic observation Jupiter is best from 2-4 am. The waning Moon visits Jupiter on Thursday the 15th.

Mars is low in the eastern sky, in the constellation of Gemini. From the 11th to the 15th Mars froms a rough line with the bright stars Castor and Pollux.

Bright white Venus is still lost in the twilight glow, returning to the evening sky later this month.

Mercury is quite close to the horizon in the morning skies. Mercury starts the week close to the bright star Regulus, although you will need a clear level horizon to see it. By the end of the week Mercury is lost in the twilight glow.

Comet 45P Honda enters the morning sky, but will be very hard to see in the twlight sky without a decent telescope. 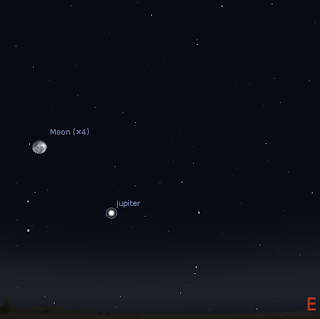 Evening sky on Thursday September 15 looking east as seen from Adelaide at 11:00 pm local time in South Australia showing Jupiter in the late evening sky not far from the waning Moon. Similar views will be seen elsewhere at the equivalent local time (click to embiggen).

Saturn is still visible low in the westen sky as the bright yellowish object not far from the bright star Spica. It is now too low in the sky for successful telescopic observation.

Despite Saturns closeness to the horizon , if you don't have a telescope, now is a good time to visit one of your local astronomical societies open nights or the local planetariums. 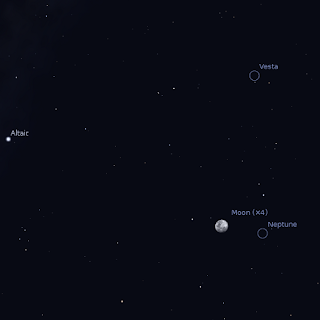 The location of Vesta as seen at 8:00 pm on Saturday September 10 looking north-east from Adelaide, similar views will be seen at equivalent local times elsewhere. Click to embiggen,

The asteroid Vesta is now past opposition, but is still readily visible in binoculars and is just below the threshold of unaided eye visibility (magnitude 6.5).

Vesta starts the week not far from the relatively bright star Phi Capricorni, making it very easy to find. During the week it moves away from Phi Capricorni. Later in the week bright Moonlight will make it difficult to see. 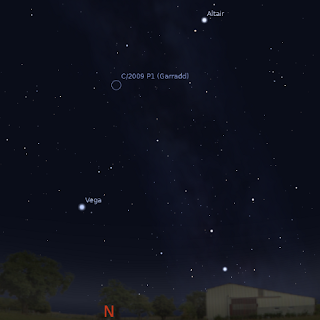 The location of Comet C/2009 Garrad as seen at 8:00 pm Saturday September 10 looking north from Adelaide, similar views will be seen at equivalent local times elsewhere. Click to embiggen,

Comet C/2009 Garrad is visible in binoculars in the northern sky, in the constellation of Sagitta, the Arrow.

Although it has brightened substantially, it is still only a fuzzy dot at magnitude 7. The best views will be under dark skies, where you might spy a short faint tail. The best viewing is around 8:00 pm, when the comet is almost due north and highest in the sky. During the week the comet will become harder to see as the Moonlight brigtens.