Last Quarter Moon is Monday August 22. Jupiter is high in the morning sky and visted by the Moon on the 19th and 20th. Mars is close to stars in Gemini, and visited by the thin crescent Moon on the 25th. Saturn is low in the western evening sky. Comet C/2009 P1 Garrad is visible in binoculars in the northern sky. 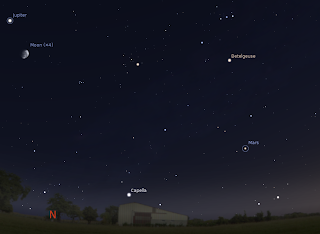 Morning sky looking north-east as seen from Adelaide at 6:00 am local time on Saturday August 20 showing the Moon, Jupiter, Mars and the constellations. Mars is close to the star Mebsuta. Similar views will be seen elsewhere at the equivalent local time. Click to embiggen.

In the morning Jupiter is high above the north-eastern sky. It is visted by the waning Moon on the 19th and 20th.

Mars is low in the eastern sky, in the constellation of Gemini. Mars stars the week close to the relatively bright star Mebsuta (eta Geminorium). On the 25th Mars is close to the thin Crescent Moon.

Bright white Venus and swift Mercury are now lost in the twilight glow. 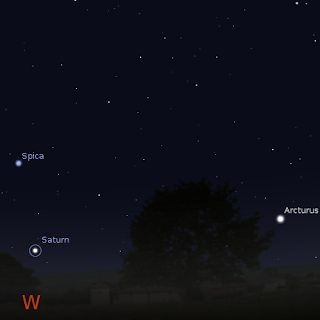 Evening sky on Saturday August 20 looking west as seen from Adelaide at 8:00 pm local time in South Australia showing Saturn in the early evening sky. Similar views will be seen elsewhere at the equivalent local time (click to embiggen).

Saturn is readily visible as the bright yellowish object not far from the bright star Spica. It is getting lower in the sky, and the window for telescopic observation is narrower.

In this short timespan, even in small telescopes you can see Saturn's rings and it's moon Titan. Despite being past opposition, when Saturn was at its biggest, Saturn is still big and beautiful. 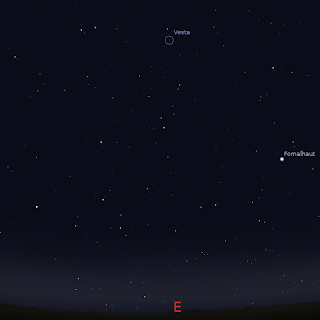 The location of Vesta as seen at 8:00 pm on August 20 looking east from Adelaide, similar views will be seen at equivalent local times elsewhere. Click to embiggen,

The asteroid Vesta is now past opposition, but is still readily visible in binoculars and is just over the threshold of unaided eye visibility (magnitude 5.9). To see it with the unaided eye you will need to be in a dark sky location though.

Vesta starts the week between the relatively bright stars 24 Capricorni and Phi Capricornii, making it very easy to find. 24 Capricorni is the fifth star up and to the right of the brightest star in Capricornus (see image to left). During the week it gets even closer to Phi Capricorni. 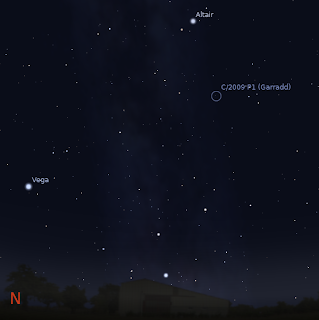 The location of Comet C/2009 Garrad as seen at 9:00 pm Saturday August 21 looking north from Adelaide, similar views will be seen at equivalent local times elsewhere. Click to embiggen,

Comet C/2009 Garrad is visible in binoculars in the northern sky, initially in the constellation of Delphinus, the Dolphin, then moving to Sagitta, the Arrow.

Although it has brightened substantially, it is still only a fuzzy dot at magnitude 7. The best views will be under dark skies, where you might spy a short faint tail. The best viewing is around 11 pm, when the comet is almost due north and highest in the sky. By the end of the week the comet will be in binocular range of a number of cluates, including M71.