As I mentioned yesterday, there are Virtual Dinosaurs stalking the University of Adelaide. Well, all of the Adelaide CBD and there are also extinct megafaunal mammals and giant flightless birds.

This is a special installation as part of Science Week. You can see these virtual dinosaurs (and mammals, and birds, but hey, birds are dinosaurs) using apps for Smart Phones such as iPhones and Android phones that can be found at Jurassic Week hosted by Adelaide Now. 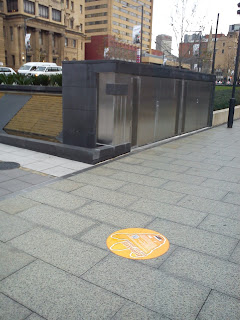 The stickers you are looking for. This is for the Deodicurus at the corner of North Terrace and Frome Road. I never did find the Rundle Mall ones.

The Jurassic Week site also has a map that locates the dinosaurs. However, zoomed out it is quite inaccurate. You have to zoom in to get an accurate location (best in satellite mode, although slower, you can get landmarks that way as well). For example, at standard zoom it looks as if the dinosaurs near the SA museum are behind the museum, when they are in front on the North Terrace side.

Each dinosaur viewing area is marked with a sticker (see left), but even though the stickers are big, they can be difficult to spot. Some patience is required.

The LAYAR software generates an image that lets you walk around the animal and take pictures from different angles and distances (see above). You can submit your pictures to yourpics@adelaidenow.com.au.

The LAYAR app has a little radar screen that tells you how far away you are and in what direction from the dinosaur. However, I found on my phone (Sony-Ericsson Xperia mini-Pro, running Android) the dinosaurs were very unstable, even when nearly on top of a dinosaur that you have been following, the signal will suddenly drop and "no dinosaurs found" come up. Even if you are in the middle of photographing a dinosaur, it can drop out (and the image can shift around a lot while you are trying to photograph it). For the Ceratosaurus at the balls, I had to walk some distance past it before it registered and then I walks back to it.

It's not just me, I ran into another dinosaur hunter with an iPod who was having the same problems (amusingly, we were imaging the same dinosaur, but the software said it was in a different direction for both of us). Still, if you go slowly and have patience catching the dinosaurs is great fun.

So if you see someone peering intently into space, holding up a mobile phone as they shuffle around in different directions, chances are its a dinosaur hunter.

Comments:
Ian, that is a fantastic idea, I just love it. Thank you for sharing it. Brilliant idea.

Its a great idea but in practice was a little flawed.

I did it last week on an android phone and my son had a android tablet. One would pick things up and not the other and vice versa. Plus if you moved it would just disappear.

I tried it again this evening with 2 Samsung Galaxy S phones - one phone picked up the dinosaur and the other nothing and vice versa!

BTW I didn't know about the stickers!