The New Moon is Saturday March 5. Jupiter is seen very low in the evening twilight sky and is close to the Moon on March 7. Venus is visible in the morning sky in the constellation of Capricorn, and visits some double stars. Saturn is well placed for telescopic observation. Globe-at-Night light pollution Survey. 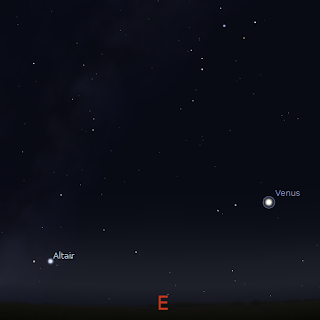 Morning sky looking east as seen from Adelaide at 5:00 am daylight saving time on Monday March 7 showing Venus in Capricorn (the double stars it is near is hidden by its brightness). Similar views will be seen elsewhere at the equivalent local time. Click to embiggen.

The New Moon is Saturday March 5.

Bright white Venus is readily seen in the early morning sky. On March 7, Venus is within one finger width of three double stars, Omicron, Rho (the closest) and Pi Capricorni, this will be intereting to view in binoculars or a small telescope.. 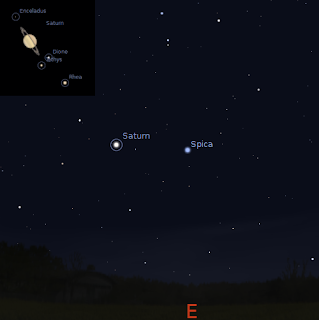 Evening sky on March 5 looking east as seen from Adelaide at 11:00 pm daylight saving time in South Australia showing Saturn near Spica. Similar views will be seen elsewhere at the equivalent local time.

Inset, the telescopic view of Saturn on the 5th (and on the morning of the 6th), you will need a fairly large telescope to see any moon other than Titan. Click to embiggen.

Even in small telescopes you can see Saturn's rings and it's moon Titan. Titan is close to Saturn on the 8th and 9th.

The asteroid Vesta is quite faint (magnitude 7.8), so you need binoculars to see it and may need to watch over a number of nights to make sure you are seeing it. However, on the 3rd it is almost on top the star pi Sagittarii (see printable PDF map here). You will need to get up a bit before 5:00 am local daylight saving time when the sky is still very dark. You will also need good, steady binoculars or a small telescope, and to make sure your eyes are dark adapted, in order to see Vesta, but it will be worthwhile. 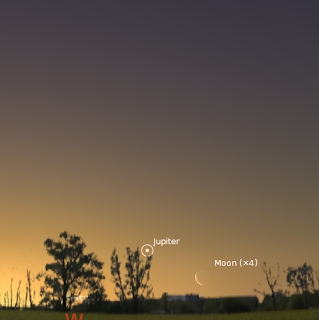 Jupiter is becoming difficult to see, setting in the late twilight. Jupiter is above the north-western horizon, setting around 9:00 pm daylight saving time.

Jupiter is too close to the horizon for good telescopic views (apparently the southern equatorial belt is back).

The Globe at Night global light pollution survey is open to all people, whever they live. This year the survey is from 21 February to 6 March.

A Cloudy Flare
NanoSail-D finally visible in Australian Evening S...
Venus near the Moon and Daylight Venus opportunity...
A Halo in the Sky
Two Mobile Phone Apps that Changed My life as an A...
Shoot the Moon with the LRO Zoomable Browser
Carnival of Space #185 is here (for real this time).
And Our Hearts Go Out To New Zealand
And No, One in Two Stars Do NOT Have an Earth-Lik...
Visualizing Exoplanets Part 2