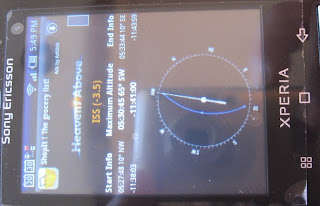 Now, although I’m a geek and love nifty programs and clever devices, I’m a bit of a luddite when it comes to mobile phones. I want my phone to be a phone. With the exception of the camera in my mobile phone, I find all the extraneous gewgaws of modern mobiles just plain annoying. Even the promise of listening to all the science and astronomy podcasts of the radio shows I miss on my phone has failed to move me.

Then, on a recent trip, as I was handing my mobile over to EldestOne for him to make a call, the screen died. The phone was still working, but you just couldn’t see anything. So I was forced to shudder upgrade.

I couldn’t get the equivalent of the old mobile I loved, so I got a phone with a 5 megapixel camera (Yayy! But that’s another post), and the Android operating system (this was by far the least fancy phone I could get). So yeah, I be can just like an iPhone owner and download heaps of “Apps”. Yeah great. Until recently, the major effect of this was that now EldestOne borrows my phone all the time to play “Angry Birds”.

The I discovered “Heavens Above” for the Mobile. I love this app to bits, it’s an app version of the web-based satellite alert system that I use (along with Cal Sky) for locating and watching satellite passes and flares. Once you have changed it from its default setting of magnitude 8 for satellite passes (!!!!!) to something more sensible, it is perfect.

In the Bad Old Days ™ , I would check “Heavens Above” on the home computer, set up an alert in the electronic diary, and check the star maps. Then, on the night (if I remembered to check the ED for events), I’d recheck the star maps, write down the flare/pass time on a slip of paper, collect the camera and my bushwalking GPS, then head outside and set the camera up. For flares, timing is critical as they only last about 10-15 seconds for maximum brightness, so I needed the GPS with its accurate clock showing seconds. Unfortunately, the clock display was tiny, so I occasionally missed a flare while peering at the clock. 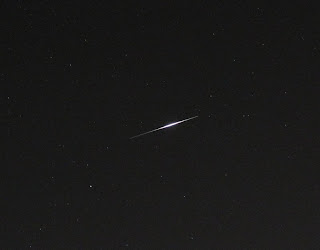 With the “Heavens Above” app, I can check encounters anywhere, the app beeps me before a significant pass, I still need to gather up my camera and phone, but the app has an inbuilt directional compass and altitude listing so I can line the camera up with the compass. And it has a reasonably readable countdown timer (could be bigger, but works for me) with accurate seconds, so timing flares is a snap.

There are two annoyances, one big, one small. The big annoyance is that the automatic time zone detection doesn’t work on my phone, whether I set the phones time zone manually or get it automatically set from the network. The app lets you set a time zone manually, but it doesn’t have a +10:30 time zone that I need for daylight saving time here in Adelaide. Luckily I can do maths, and the count down time counts up as well so adding an hour is no problem. The minor annoyance is that the app currently doesn’t do NanoSail-D. 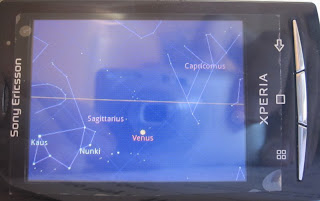 The other app is Google SkyMap (which annoyingly subsumes the name of my workhorse planetarium program SkyMap). Now, I know what the sky looks like, so while it is cute to point your phone at the sky and see the constellations above mirrored therein it’s not much help to a seasoned amateur. If you are just starting out, or want to help people starting out, it’s very helpful though. But what I do use if for is finding Venus in the daylight.

Usually, when looking for daylight Venus I use its proximity to the Moon when the two are close, or establish its predawn location against a landmark. With Google SkyMap I can now find it anywhere (did so this morning). You have to get used to the fact that (in my phone at least) an object centred in the screen is just off the top left of the phone when held at arms length. Once you have the relative location of objects to your phone worked out, finding Venus in the daytime is a snap. I also used it to show my colleagues the daytime Moon.

There are a lot more astronomy apps, but that’s a post for another day.

Shoot the Moon with the LRO Zoomable Browser
Carnival of Space #185 is here (for real this time).
And Our Hearts Go Out To New Zealand
And No, One in Two Stars Do NOT Have an Earth-Lik...
Visualizing Exoplanets Part 2
The Sky This Week - Thursday February 24 to Thursd...
6th Globe at Night Campaign (Feb. 21 - March 6, 2011)
The Tarantula Nebula (and FITS Liberator)
Aurora Alert 17 Feb! Geomagnetic Storm on Now!
Tyche, it's not Nibiru (and probably not even real)