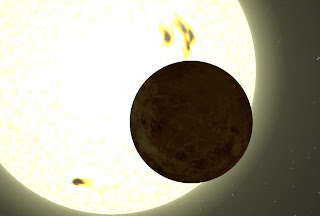 Visualization of Kepler 10b using Celestia.

This is a bit of oldish news, but I've got Celestia add-on's on the end of the post, so you can visit this world in Celestia.

The Kepler spacecraft, which has been finding a host of interesting extra-solar planets, has found the first unambiguously rocky planet around another sun (and the first rocky planet found by Kepler).

Not the first possibly rocky planet, that was COROT 7b, but there is sufficient uncertainty in its mass that it might be an ice/water world.

Kepler measures the tiny dips in intensity in a stars light that occurs when a planet passes in front of its Sun. From the depth of the dip, you can determine how big the planet is. It is only 1.4 times the size of the Earth, one of the smallest exoplanets found.

Using ground-based observations with the Keck telescope they then determined the mass of the planet. From that you can determine the density of the planet. Kepler 10b's density is 8.8 grams per cubic centimeter, which is far denser than Earth at 5.5 grams per cubic centimeter. This means that the world is rocky, possibly even mostly metal. You cn read the original paper here.

Despite being Earth-sized, and orbiting a Sun-like star, Kepler 10b is not Earth-like. It orbits its Sun far closer than Mercury does to ours, its surface is a blistering 1600 degrees C, hot enough to melt many metals. It might be a world a magma lakes and rivers of lava, a bit like Mustafar.

You may wish to add Kepler 10b to Celestia. This is not as straight forward as other extrasolar planets we have added to Celestia, as Kepler 10b's home star is not in the Celestia catalog. So we have to create one.

The file below contains Kepler 10b's parent sun, and two other recent extrasolar parent stars that are not in the Celestia catalog. Simply cut and paste the parameters below to a file and save it as newextrasolar.stc in the extras folder of Celestia.

Now we have the star, we can add the planet. Cut and paste the parameters below to a file and save it as kepler10b.ssc in the extras folder of Celestia. I've used Venus as the texture, for lack of anything else.

# Most unambiguous rocky world found as of Jan 2011