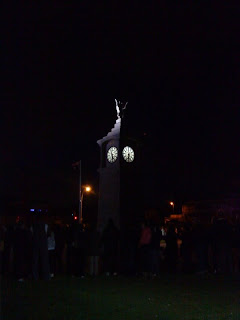 This is the 95th Anniversary of the dawn landing at ANZAC cove, Gallipoli. Mum (WRANS, signals, HMAS Cuttable) can't march again this year, but hopes to make it next year. I went to the service at Semaphore. It's hard for non-Australians to grasp why we commemorate a complete and utter disaster, but that's us as a nation. To re-enforce this, strange to overseas sensibilities, the march to the memorial was started by playing a song about a larcenous vagabond who commits suicide.

Appropriately, this year Jupiter accompanied us. The overlord of the planets played host to the State Member for the area, the Federal member for the area and the Mayor of Port Adelaide-Enfield. Why such a pooling of political power at humble Semaphore, rather than the Port itself? Maybe because the port hosts the Flotilla of Light?

Every year the crowd seems to get bigger, but thye don't really participate in either the hymns or the National Anthem, perfering to let the invited singer do all the heavy lifting. It's another mark of us as a nation that no-one knows more than the first two lines of our National Anthem.

The Last Post plays, children cry as the honour regiment fires a tribute, and we disperse into the paling dawn.

Using The Gimp for Astrophotography (Part 1)
Stunning Images from the Solar Dynamics Observatory
Virtual Telescope - Walking on the Moon!
The Case of the Missing Comet (or - where oh where...
The Sky This Week - Thursday April 22 to Thursday ...
So about Venus and the Occultation of the Pleaides
Airfix in the House (Part Two)
Wait! Mercury Has a Tail (and an astreoid occultat...
Virtual Telescope Session Postponed
Venus, Moon and an Occultation of the Pleiades Apr...