The Full Moon is Wednesday April 28. Venus appears low in the twilight and is near the beautiful Pleiades cluster. Mars is close to the Beehive Cluster. Saturn is seen in the evening above the north-eastern horizon near the bight stars Regulus and Spica and is close to the Moon on Sunday April 25. Jupiter is easily seen in the morning sky. 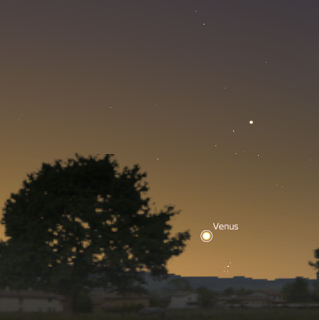 The evening sky facing west in Australia on April 25 at 6:10 pm local time showing Venus and the Pleiades cluster.

The Full Moon is Wednesday April 28.

Saturn is rising around before Sunset and is easily visible in the evening sky as the bright yellow object between the bright stars Regulus and Spica. Now is still a very good time for telescopic observation of the ringed world. On the 23rd, Saturns' Moon Titan cruises just above the planets north pole.

On Sunday 25 April the Moon is close to Saturn, then on Tuesday the nearly full Moon is very close to the bright star Spica.

However, it is best to wait until around 11 pm, when Saturn is quite high in the sky for the best telescopic views. Saturn's' rings are opening, and look quite beautiful, even in a small telescope. If you don't have a telescope, now is a good time to visit one of your local astronomical societies open nights or the local planetariums.

Bright white Venus continues to rise above from the twilight glow. People with flat, level horizons can see Venus above the western horizon half an hour after Sunset. From Thursday 22nd April to Sunday 25 April , Venus is close to the Pleidades cluster. You may need binoculars to see the faint cluser close to the horizon and you will need a flat, level horizon to see them low in the late twilight sky.

Jupiter is now relatively easy to see in the morning sky as the brightest object above the eastern horizon. 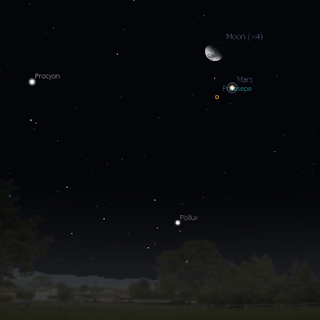 In the evening Mars can be seen low in the north-western sky as the brightest (and clearly red) object in that part of the sky. Red Mars is in the constellation of Cancer, near the Beehive Cluster (Praesaepe).

Mars is within binocular range of the beautiful Beehive Cluster this week. While Mars and the Beehive are easily seen under dark country skies, in the suburbs you will need binoculars to to see them. Even in low power binoculars they will look great. 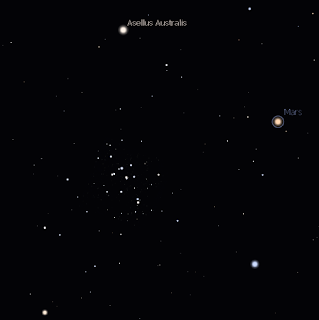 Mars forms a line with the bright stars Sirius and Procyon. Mars forms another line with Regulus, Saturn and Spica.

So about Venus and the Occultation of the Pleaides...
Airfix in the House (Part Two)
Wait! Mercury Has a Tail (and an astreoid occultat...
Virtual Telescope Session Postponed
Venus, Moon and an Occultation of the Pleiades Apr...
I'm Controling the Virtual Telescope Saturday Morn...
Woo Hoo!! Simon Singh Wins!
Carnival of Space #149 is here.
Mercury in STEREO H1b
Don't Forget - Are We alone!