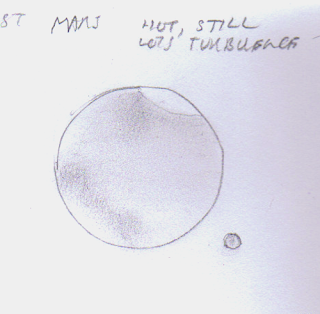 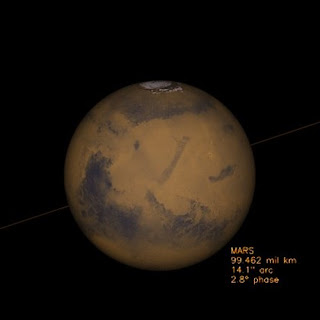 Left Image: Mars as sketched through my 4.5" Newtonian Reflector. Right Image: Mars earthward facing side at the same time as I was sketching, via the JPL Solar System Simulator.

The opposition of Mars for 2010 was last night. It was never going to be an auspicious opposition, Mars having the smallest diameter since 2003 and the opposition being in Summer here, Masr never gets far above the horizon, where murk and turbulence interfere with viewing.

Given that it was 36 degrees C during the day, and still 25 degrees in the middle of the night, turbulence was going to be a big problem. Also given that it was eldest sons bithday party (he is a prime number old, which is the sum of MiddleOnes age (an even number) and half SmalestOnes age (his full age is an even number and half is age is a prime)) with kids rushing around it was not going to be a good time to get out Don the 8" Newtonian and my astrophotography gear.

Still, I was able to get out my unguided 4.5" Netwonian and combine my youth watching duties with observing the red world. I even got the kids to have a look at Mars, the "Blue" Moon and Saturn.

Despite the viewing being shocking, through my 6.5 mm Plosell lens the bright white polar cap was clearly visible. There were also sufficient moments of stillness where I could see some darker markings, and I got them down. Satisyingly, despite the conditions my sketch is in good agreement with the surface marking that were visible at that time. Not bad, seeing as the smaller circle in my sketch is approximately the size Mars looked like through my 6.5 mm lens.

Mars will still be good for most of February, so why not get out and have a look?

The Sun From Other Planets
Opposition of Mars (and a blue Moon), Saturday Jan...
So that's Why They are Searching for a Ring Around...
A Table of Delights for Exoplanet Fans
Big Aussie Star Hunt Summer Sky Tours
Fred Watson gets Honoured
Who can work out why ...
Carnival of Space #138 is here.
Monckton on the Radio
The Sky This Week - Thursday January 28 to Thursda...