Eggshells in Vinegar (experiments with kids) 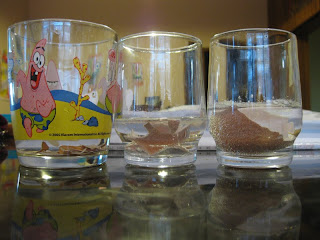 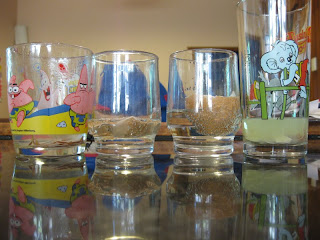 Left Panel, from left to right. Eggshells in water, white vinegar and a half eggshell in vinegar. Right Panel, eggshells in same order, five days later. End cup is eggshells in vinegar with pH indicator.

Inspired by Janet D. Stemwedel's Friday Sprog Blogging series on a number of experiments she's been doing with her kids, I tried a version of the Eggshell in Vinegar experiment Janet and her kids did (you have to scroll down, results here).

My assistant was SmallestOne. He and I used mostly crushed eggshells with one exception, half an egg shell. All were taken form hard boiled eggs. I included a control, with eggshells in deionized water, and the other three tumblers all had standard white vinegar in them, in one of the vinegar containing tumblers I added a Ph indicator - a dye that changes colour depending whether the solution is acid (as vinegar is) neutral (like plain water) or basic (like drano) to see if the amount of eggshells added exhausted all the acid in the vinegar.

Once added, the bubbles began to form rapidly around the eggshells in the vinegar solution, but not in the deionized water control. The bubbles were carbon dioxide form the acid attacking the calcium carbonate of the egg shell (how would you demonstrate that?). The bubbles were so vigorous they lifted the broken eggshells in a strong roiling action (see video). SmallestOne loved this, and the colour the Ph idicator went when we added it to the vinegar. He wanted to do more "colours". 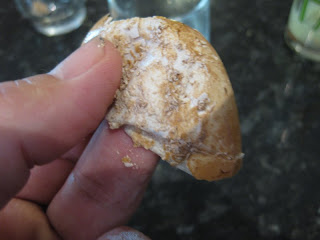 Five days later we had a look again. The control deionized eggshell fragments were still hrad and crunchy, and surprisingly, so was the eggshell fragments in the tumbler with vinegar, maybe not as solid and crunchy as the controls, but, unlike Janet's, where her eggshells disappeared in only 24 hours, they were pretty solid! What happened? Three hypotheses:

1) They have much stronger vinegar in the US.
2) The Eggshells were supported on the surface by a layer of carbon dioxide gas, and the vinegar was not as effective at getting to the shell.
3) I didn't use enough vinegar.

I suspect it's a combination of 2 and 3. Certainly the fragments were floating, and the glass with pH indicator changed colour, suggesting that the acid in the vinegar was, if not exhausted, certainly very depleted. However, the half shell egg shell, which had fluid inside and out, and was a lot more immersed on the solution than the fragments, certainly was greatly decalcified (see above image, where the previously hard eggshell is now like floppy rubber), except where it had bits sticking out of the vinegar where it had been bouyed up by the gas bubbles.

So now SmallestOne and I have to do a repeat experiment to find out which one of 2 and 3 is correct. What experiments should do you think we should do?