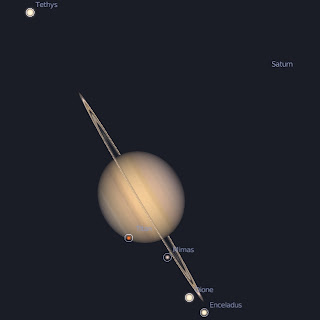 Titan just begins to pass across the face of Saturn in this Stellarium image.

On February 24 there will be a second rare Transit of Titan across the face of Saturn. This time you will be able to see the shadow of Titan on Saturn (if you have a good enough telescope).

The shadow will be visible on Saturn about forty minutes before the transit starts. As well the Moons Mimas, Dione and Encladeus will transit not long after Titan, but you will need a 8” or better telescope to see the moons effectively. Even 4” reflectors and 50mm refractors will be able to see Titan enter Saturn's disk, although you will not be able to see Titan once it is on the disk, you may see its shadow. Mimas will start to transit about 40 minutes after Titan, and the other two about two and a half hours later (Note that the image on Mike Salaways page has Mimas in the wrong location. everything else is correct, I suspect StarryNight weirdness. Stellarium for example, has everything in the right place but one hour earlier!)

Save the file in the Stellarium scripts folder, then run the script for an animation of the transit (without shadows). To rum the sript, in stellarium press M (menu) use the down arrow to get to 7. scripts, right arrow to get to select scripts, down arrow to pick up Titan_transit.sts, press enter them M, and sit back and watch.

And of course there is the real thing. Mike Salaway's animation and Christiopher Go's animation of the transits they observed. Go have a look.