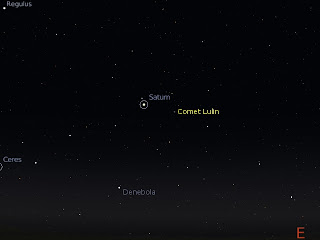 Comet Lulin at 11 pm looking east on the 23rd of February (click to enlarge). The comet will appear as a faint, fuzzy star. It will be readily visible at dark sky sites and just visible under most suburban skies.

Comet Lulin is now very easily visible in binoculars, with the waning Moon producing less sky brightness. I’ve been watching it for the past 3 mornings, but have not been sufficiently organised to do any sketching.

With in a few days the sky should be sufficiently dark for it to be visible to the unaided eye, even under most suburban skies (but not if you live in the inner city). Also, in the next few days the comet will be high enough above the horizon so that you can see it around 11 pm in the evening. The best views will still be in the early morning, but you now really don’t need to drag yourself out of bed early (unless you want to see the hijinks of Mercury, Jupiter and Mars that is).

Lulin is fairly hooting along now. In fact, if you have the patience, you can see it move through a binocular field over a couple of hours. Why not try and sketch its movement over a few hours of on night. Lulin is also getting brighter. Lulin will be at its brightest between the 20th and 25th of February, which will be a god time to see it. As well, on the 23rd and 24th of February, Lulin will be within a binocular field of Saturn, which should look rather nice. On the 24th there is also a rare transit of Titan, so this will be a good time to get the telescope out.

Spaceweather has a nice comet gallery of Lulin images.

Comments:
For Chistmass, I purchased some 80x20 binoculars for my wife.

These are rather large and almost impossible to use without a tripod.

Now that comet Lulin is getting brighter, my wife now understands why this was a rather special gift...