Mars glows in the heart of the Beehive 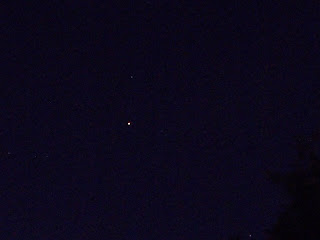 Mars was brilliant in the heart of the Beehive last night. Some friends were over and I showed it to them in binoculars. They were suitably impressed. MiddleOne had a go too. He found it hard to hold the binoculars, but eventually saw the Beehive.

My attempt to photograph the event was not so successful. I left it too late (too busy enjoying it with friends), and Mars was too low and the background sky brightness was too high to get the fainter stars ... but I got Mars.

Tonight I'll try again earlier, juts after astronomical twilight when everthing is higher in the sky.

Carnival of Space #55 is here.
Things You See Without a Camera IV
It's a Goal
Things you see when you don't have a camera (but d...
Saturn Mars and the Beehive from STEREO
Mars in the Beehive (21-24May)
Comet C/2007 W1 Boattini in STEREO
Carnival of Space #54 is here.
Yet another World Wide Telescope Review
The Moon Covers Mars.