Help, I've been tagged with the 8 things Meme

Peripatetic Philosopher John Wilkins over at Evolving thoughts has Tagged me with the 8 things meme.

1. We have to post these rules before we give you the facts.
2. Players start with eight random facts/habits about themselves.
3. People who are tagged need to write their own blog about their eight things and post these rules.
4. At the end of your blog, you need to choose eight people to get tagged and list their names.
5. Don’t forget to leave them a comment telling them they’re tagged, and to read your blog. 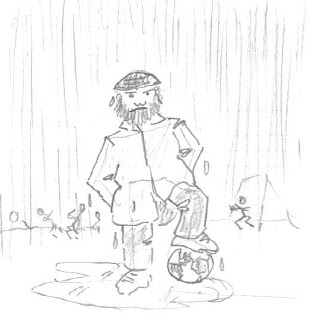 1. For my sins, I half-coach the under 13's soccer team for Eldest Ones School. Eldest One plays midfield mostly. So far, with the current team (a merged U11 and U13 team) we have not actually won a game. But we will.

2. You know the scene in Nerds FC season one, where they pay against a prison team. Well the same thing happened to my old soccer team, The Vultures. We had to play Boggo Road Prison team. It was a very scary experience.

3. I used to be a cartoonist in my early years. With some friends, we bought an old offset printing machine and tried to produce our own comics. If there is any justice in the Universe, no copies of these will exist.

4. I like folk music (but I don't dance around with hankies and bells), and (very) occasionally the Bettdeckererschnappender weisle and I hang out at the South Australian Folk centre (when the kids let us).

5. I really like the music of Mal Webb, and have done a couple of vocal workshops with him (along with lots of other people). Sadly, it would have helped if I actually had some musical talent (unlike the Bettdeckererschnappender weisle, who has a beautiful singing voice). I even got to be his chauffeur once. My favorite song of his is Waterbears , about microscopicanimalcules that resist boiling, freezing and hard vacuum. Here is a video of Mal Webbs vocal chords in action.

6. I like bushwalking, and combining bushwalking and folk music in Folk Camps is really cool.

7. I have 4 telescopes, my bushwalking 50 mm refractor, my 115 mm reflector, the old 6" reflector I built with my dad and the 8" reflector I inherited from a family friend.