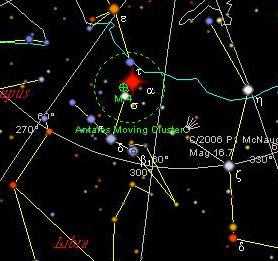 Comets P/2006 HR30 (Siding Spring) and P1 (Mc-Naught) and around magnitude 15 or so at the moment, and only really visible to popel with serious kit. However, there are some nice images of HR30 (found by Australia's Siding SPring Observatory) here and here and a nice animation here.

P1 Mc-Naught (discovered by an Australian astronomer, Rob McNaught) is currently in Scorpio, but during January 2007 it will swing past the Sun, possibly becoming brighter than magnitude 2. While this wil be unobservable to us (too close to the Sun), it will possibly be caught on the SOHO C3 camera. P1 will also probably be a reasonably bright but difficult binocular object in the Southern Hemisphere in late January early February. Images of P1 McNaught are here.

Meteorite Fragments Recovered in Norway
Update on Sunspt Group 904
Sunspot 904
It's not how I would teach Astronomy.
Venus and Mercury close the next few mornings
Saturn in Conjunction
What the fuss was about last night
Aurora alert (8:00 pm ACST)
The Mars Hoax that Wouldn't Die
Where's Saturn Now?