The Crux of the Matter

(Image credit BOM) As I write, the boys are asleep in bed (except MiddleOne, who is asleep in the small tent erected in their bedroom), the Bettdeckererschnappender weisle is out at choir practice, getting ready for next weeks concert...and rain is hammering down outside. The forecast hail has not yet arrived, and may have missed the coastal provinces. 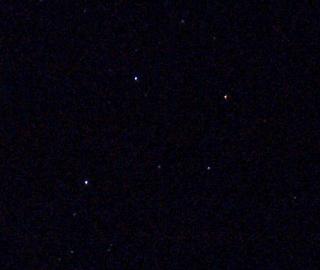 This means that I have missed the occlutation of sigma Scorpii, and the near miss of Antares later tonight is out of the question. And the weekend started out with such promise. The vice Chancellor had emailed us to say the weather forecast for Sundays Open Day was good (and by the way, the survey that ranked us 36th out of 38 Universities in teaching quality was flawed). Friday night I wandered out into the night after the special news report on why we ranked so badly (a slightly shell shocked Minister repeated that the rankings were flawed). The sky was brilliantly clear, I could see the Milky Way with uncharacteristic clarity, even the dust lanes were clear. I took a quick snap of the Southern Cross (click on the image for a larger, more detailed version). Sadly, I can't control the exposure, the maximum I can get is around six seconds under dark skies. This image compares favorably with one I did at a dark sky site about a month ago (I still have to blog that trip), but you can't see the Jewel box, or any interesting clusters, but the colours of the brighter stars are visible.

Saturday night was clear with some fluffy clouds, I thought about getting my scope up and doing some Moon shots, but elected to watch the final episode of Dr. Who and Steamboy instead. Steamboy was supposed to be a feel-good pick-me-up after the scary (but absolutely fantastic) Dr. Who finale (In space, no one can here you say "EXTERMINATE"), but it was a quirky, dark and morally convoluted tale about the use and abuse of science. Even the spectacular animation and amazing steam contrivances didn't bring cheer as the protagonists tried to sort of how science can be used for good or evil. To top off the evening, the weather forecast for Sunday had turned from nice to nasty.

So on Sunday I was out in a Marquee in the forecourt, trying to convince bright young things that enrolling at our University was a great idea, (being 36th worst at teaching not withstanding) while the marquee groaned and shuddered in the wind like a windjammer flying before a storm. The sad thing was that so many of them were just after vocational training (or entry into medicine).

A number of them expressed uncertainty about what aspect of science they should choose. "What excites you?" I ask, "what have you recently read or seen about science that has made you go 'Wow!'" "Ahh, I dunno, nothing" they reply. That is just so sad. Why are they doing science if it doesn't strike a chord in them. Perhaps influenced unduly by "Steamboy" I expected people to be passionate about science, to be doing it because they expected to do good for the world through it (or on the dark side, to gain power and money through it), but existential wishy washy-ness? Who expects that?

But I did come across some kids who were interested and excited by science, and had some good rousing conversations with them and their parents (even if they didn't want to enroll in our course, who cares, science is FUN). There are a few kids going to bed at tonight knowing that they are not alone, and that liking, even loving, science is okay (and one whose request for a telescope was bolstered by my explanations of how much a telescope meant to me as a teenager). These kids set your heart singing.

I was a trace saddened about the number of people who thought pharmacology was Pharmacy (or the number of people who had no idea of the existence of Pharmacology). We soon pointed out the difference, Pharmacists dispense drugs, Pharmacolgists find new drugs (or work out better ways to use old drugs, or work out when it is best not to take drugs - My Masters was on stress and high blood pressure trying to get a handle on non-drug treatments for mild high blood pressure). A large number of people also treated the entire concept of drugs with a shudder. Drugs, even therapeutic drugs, are seen with distaste and dismay, as if they pollute our bodies. Yet these people generally drink wine. Alcohol is a drug, but many people ignore that, but there is more.

A glass of red wine or two (but not much more [depends of body mass]) is actually recommended for improving your heart function and reducing the risk of Alzheimer's disease. The antioxidants in red wine are responsible for this (and it was Pharmacologists who worked this out), so we can use red wine as a drug to improve our health (in moderation of course). People who by energy drinks with Gurana, under the impression that they are avoiding polluting their body with drugs, are indeed getting drugs, Gurana is mostly caffeine (and people buying coffee and guaran drinks are just getting expensive caffeine). I had as my prop for a can of energy drink which I used to get people to think about drugs, many people were also carrying around bottles of water plus, water with added vitamins, expensive waste of time water, but that also allowed me to discuss the concept of drugs and try and shatter drug myths.

I am a great fan of public science outreach, as a scientist my research is funded to some lesser or greater degree by the public, and I feel it's important that people get some degree of information back in return. While most people were there to find the best place/course for their children to enroll, I added to their experience by explaining some of the latest research about reducing the risk of heart attack and Alzheimer's disease (modest exercise, lots of green leafy vegetables to keep your folate levels up, modest red wine consumption) as a means of explaining what it is that Pharmacologists do. They hopefully came away not only with the impression that our Uni and our courses were great for their children's careers, and that science itself was a Good Thing (tm), but with a better understanding of the role of pharmacology in their lives.

Drugs are entwined in our lives in many ways, from being naturally in the food we eat, to being in "smart foods" that we use to try and boost our abilities, to influencing public policy (eg do we support new cancer treatments that are very effective, but very expensive, from the public purse). So if I can help people understand what drugs are, how we use them, and how we develop them, I hope I have gone some way to empowering them, as "consumers" and voters in a democratic society where many decisions turn on public understanding of science.

And that is the Crux of the matter.

Comments:
I'm a student myself and I've seen too many physics students over the last few years that don't really have any enthusiasm for the subject.

Usually they are doing physics because they were good at it at school or perhaps they were expected to do a 'proper' subject by their family. Either way it frustrates me - they should do a subject that excites them rather than spending the rest of their lives bored to tears. I hasten to add that I find physics/astrophysics a lot of fun. That is why I'm still doing it!

A few years ago our physics department was ranked 40th in the UK by one British newspaper while another put us in the top five. The University Teaching Quality Assessment gave us full marks. Where you come on these lists depends on the weightings applied to the different areas. As a result, rankings have very little credibility with me.

A few months ago I was talking to a young lad and his dad. I was appauled by the attitude of the boy's dad - he seemed to be actively ridiculing his son's interest in astronomy. That is the first time I've seen an attitude like that. I tried to keep the dad occupied while the kid got to spend a few minutes in our inflatable planetarium without him. Hopefully that little boy will keep his fascination with the Universe as he gets older.

Great post! Reminded me of the blank stares on some students faces when I bring up ploidy. Oh and good shot of the southern cross.

Rankings suck, as Stuart says, they can wildly vary for no good reason, and this particular one wasn't put together particularly well. But the beancounters like it as they can distribute cash on that basis.

Full marks for distracting the kids dad Stuart. Helping kids to see that an interest in science is good is a great thing.

Tom, you actually talk about ploidy, you must be a brave person. Even the pharmacogenteics guy doesn't mention ploidy. Many of our students have a hard time as someone decided that students didn't have to have basic backgounds in physiology, chemistry or genetics to do Pharmacology, as we depend heavilly on all three, at any one time 1/3 of our studnets are floundering.

I HATE SCIENCE AND ASTONAMY!