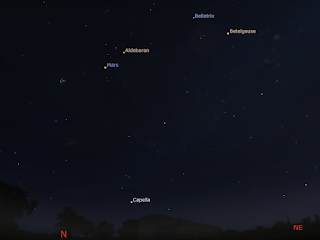 Morning sky on Saturday, September 3 as seen from Adelaide at 05:08 ACST (90 minutes before sunrise).

Mars is in between the Pleiades and the bright red star Aldebaran.

Similar views will be seen from the rest of Australia at the equivalent local time (90 minutes before sunrise. click to embiggen).

The September edition of Southern Skywatch is now up (sorry about the delay yet again, life happened once more). The planetary action is moving back to the evening skies, Jupiter is at opposition and Saturn is just past opposition. Mercury is still prominent in the first half of the month. Venus is lost to view this month. Saturn, Jupiter and Mars are still visible in the morning skies, though Saturn is progressively harder to see.

Mercury  is high(ish) in evening sky, and remains high in the first half of the month then rapidly heads towards the horizon and is soon lost to view.  It is low above western horizon at astronomical twilight, and hour and a half after sunset at after sunset when the sky is fully dark in the first week of the month and gets progressively lower. By mid-month it is best seen an hour after sunset (nautical twilight and is soon lost in the sunset glow after this, returning to the morning sky late in the month.

Mars is becoming brighter in the morning sky as it nears opposition. On the 1st to 3rd Mars passes between the Pleiades and Hyades, an excellent morning sight with Mars forming a second eye for Taurus the Bull with the red star Aldebaran. By the 13th Mars has left Aldebaran behind. On September 17th, Mars is under 5 ° from the waning Moon. The pair just seen together in binoculars.

Jupiter rises shortly after the sky is fully dark and climbs higher in the evening sky and is an excellent telescopic object in the late evening early morning. Jupiter is at opposition, when it is biggest and brightest as seen from Earth on the 27th. At this time, it is visible the whole night long. On the 11th Jupiter rises just below the Full Moon, with the pair in the same binocular field and Jupiter only 2° away.

Saturn is now visible all evening long setting in the Ealy morning. Saturn was at opposition on the 15th of August and is visible high above the northeastern sky when the sky is fully dark. Saturn will be high enough for good telescopic observation in the mid evening and early morning. Saturn forms a very shallow triangle with delta and gamma Capricorn, becoming more elongated as the month wears on.  Sep 6 and 17 sees Titan close to Saturn.
On the 8th (morning 19th) the waxing Moon is close to Saturn.