Thursday May 26 to Thursday June 2

The New Moon is Monday, May 30. Four bright planets are visible in a line in the morning sky. Saturn, Mars, Venus and Jupiter. Jupiter is climbing higher in the sky leaving  Mars and Venus behind.

The New Moon is Monday, May 30. The Moon is at apogee, when it is furthest from the Earth, on June 2. 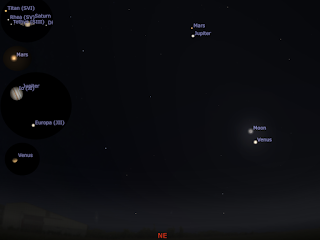 Morning sky on Friday, May 27 as seen from Adelaide at 5:42 am ACST (90 minutes before sunrise). Saturn, Mars, Jupiter and Venus form a line (Saturn is just out of frame to the north) . The crescent  Moon is close to Venus. 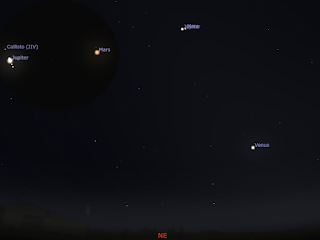 Morning sky on Monday, May 30 as seen from Adelaide at 5:44 am ACST (90 minutes before sunrise). Jupiter and Mars are at their closest. The pair fit within the field of view of 10x50 binoculars an wide field telescope eye pieces.
The inset show the binocular appearance of the Mars and Jupiter at this time. 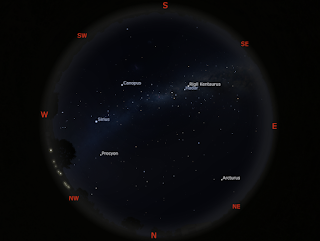 Whole sky on Saturday, May 28, 18:43 ACST, 90 minutes after sunset (click to embiggen). Orion can be seen just above the western horizon. As Orion sinks Scorpius rises above the Eastern horizon. Between the bright star Canopus and the Southern Cross are a wealth of binocular objects to discover.

Mercury is difficult to see low in the twilight glow.

Venus is lowering in the morning twilightand is close to the thin crescent Moon on the 27th.

Mars forms a line with Saturn, Jupiter, and Venus. Mars draws closer to Jupiter. On May 30 the pair are at their closest, a rather spectacular sight.

Jupiter climbs higher in the morning twilight below Saturn and Mars. Over the Week Jupiter leaves Venus behind and closes in on Mars. On May 30 the pair are at their closest, a rather spectacular sight.