The Full Moon is Monday November 30, this is a Blue Moon with a penumbral eclipse. the Moon is at apogee, when it is furthest from the Earth, on the 27th. 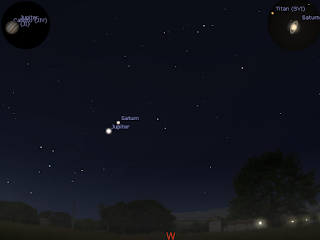 Evening sky at 21:55 ACDST (90 minutes after sunset) on Saturday, November 28 facing west as seen from Adelaide. The pair of Jupiter and Saturn are above the western horizon.  The pair are visibly closer now, heading for their spectacular meeting in December. 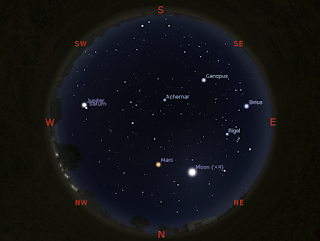 Three bright planets are visible stretching west to east. Jupiter, Saturn and Mars. The Moon moves away from the lineup this week. 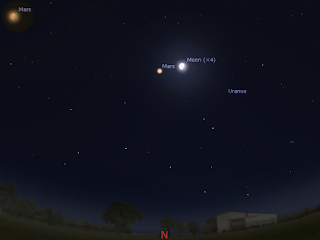 Evening sky at 21:52 ACDST  (90 minutes after sunset) on  Thursday, November 26 facing north as seen from Adelaide. Mars is above the northern horizon near the waxing Moon. Mars is past opposition, but is still excellent. more details here.
The inset shows the telescopic view of Mars at this time. Similar views will be seen elsewhere in Australia at the equivalent local time (90 minutes after sunset), click to embiggen. 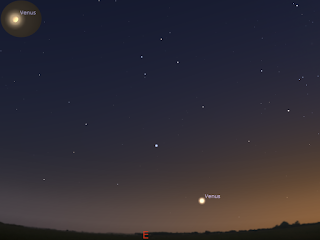 Morning sky on Saturday, November 28 showing the eastern sky as seen from Adelaide at 5:07 am ACDST (45 minutes before sunrise). Venus is getting lower to the horizon. The comet C/2020 S3 Erasmus is visible in binoculars near Venus.

Evening sky on November 30 looking east as seen from Sydney at 20:43 AEDST, at mid-eclipse. (click to embiggen). The subtle darkening of the Moon may be hard to spot.

Unfortunately, the November 30 penumbral eclipse occurs in the early evening, mostly in twilight. The moon is only partly embedded in Earths' outer shadow and the darkening will be difficult to spot. Eastern states have the best view and WA misses out.

You don't need special filters or fancy equipment to watch the lunar eclipse, you just need your eyes and somewhere comfortable to sit and watch. Watching the faint outer shadow of earth creep across the Moons face is quite challenging, as the darkening is subtle, but those on the east coast may find it rewarding (I have with past penumbral eclipses). The Moon is very obvious as it rises in the east.

For all states, the eclipse starts with the Moon below the horizon.

For the eastern states mid eclipse occurs at 20:43 AEDST with the Moon nearly two hand-spans above the horizon, and after civil twilight, so although faint it should be visible. The eclipse ends at 22:56 pm AEDST. In the central states, mid-eclipse occurs with the Moon just rising, deep in the twilight shortly after sunset and will be difficult to see, the eclipse end occurs 22:26 pm ACDST, after the end of astronomical twilight.

In WA, the eclipse start and mid eclipse all occur with the Moon below the horizon, and the rest of the eclipse deep in the twilight. Further details, and links to photography guides and past penumbral eclipses are here.

This week three bright planets,  Jupiter, Saturn and Mars can be seen at astronomical twilight, 90 minutes after sunset. Mars is high above the northern horizon and although slowly dimming, bright red Mars is unmistakable.The moon leaves the planetary lineup this week.

Mars is readily visible in the evening sky above the north -eastern horizon in the early evening. The waxing Moon is close to Mars on the 26th. Mars is close to the variable star Mira, which is still reasonably bright but will be difficult to see in the Moonlight. Mars was at opposition, when it is biggest and brightest as seen from Earth, on October the 14th, but is still worthwhile observing. Observing details and more at the Mars Opposition site.
Jupiter can be readily seen in the early evening sky in the west. Jupiter and Saturn start out two finger-widths apart at the beginning of the week but slowly draw closer. The pair are prominent in the evening skies along with Mars.
Saturn too is visible in the early evening skies in the west and is also still an excellent sight.
Printable PDF maps of the Eastern sky at 10 pm AEST, Western sky at 10 pm AEST. For further details and more information on what's up in the sky, see Southern Skywatch.