The New Moon is Thursday, April 23. Venus is prominent in the evening sky well after twilight. You may be able to see shadows cast by Venus. Venus is at it brightest on the 28th  Venus is close to the crescent Moon on the 26th and 27th. Four bright planets (just) are visible in the morning skies. Jupiter dominates the morning skies near Saturn and the pair are above Mars.Jupiter and Saturn are now rising before midnight, but are still best in the morning. An emu graces the evening sky.

The New Moon is Thursday, April 23. 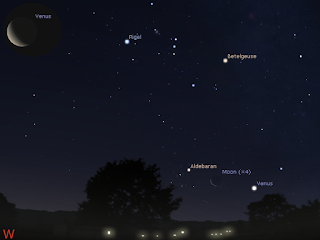 Evening sky at 18:35 ACST on Sunday, April 26 (60 minutes after sunset) looking west as seen from Adelaide. Venus is prominent in the sky near the "V" shaped Hyades cluster. The thin crescent Moon is between the Hyades and Venus. The inset shows the telescope view of Venus.

Venus is a distinct "crescent Moon" shape in even small telescopes. It will be interesting to image crescent Venus and The crescent Moon at this time. Similar views will be seen elsewhere in Australia 60 minutes after sunset, click to embiggen. 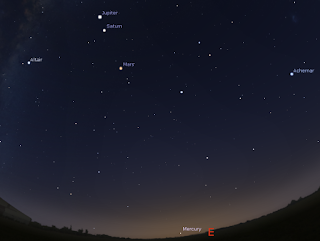 Morning sky at 6:00 am ACST facing east as seen from Adelaide on Saturday, April 25. The time is that of the playing of the last post for the ANZAC dawn service.

Three bright planets are dominating the morning skies. Jupiter, Saturn and Mars are high in the morning sky. Mercury is low on the horizon and difficult to see. It will be lost in the twilight soon.


Similar views will be seen elsewhere in Australia at the 6:00 am local time. 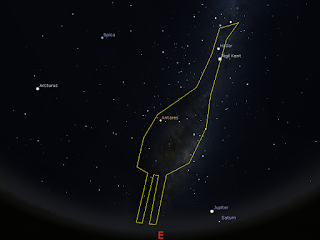 The dark constellation of the Emu is visible. It;s head the the coal sack below the Southern Cross, it's neck the dark lane the runs through the pointers down to Scorpius, which forms a fringe of feathers on the body. Jupiter and Saturn are close to the horizon near the Emu's legs.

Similar views will be seen elsewhere in Australia at the equivalent local time.

Venus is prominent above the western horizon in the early evening sky. Venus is readily seen up to 90 minutes after sunset and will be at greatest brilliance this week. If you look early in the week before the Moon interferes oyou may be able to see shadows cast by Venus. Venus is near the beautiful Hyades cluster heading towards the bright star Elnath (Beta Tauri). Venus is close to the crescent Moon on the 26th and 27th.

Four bright planets grace the morning sky. This is the last week to see Mercury before it is lost in the twilight.

Mercury is just visible in the early twilight, and will be lost to view soon.

Jupiter climbs higher in the morning sky. Jupiter and Saturn stay around a hand-span apart during the week.

Comments:
I wish you'd mentioned the lyrids! I didn't find out about them until after the peak :(