The Last  Quarter Moon is Wednesday, April 15. Venus is prominent in the evening sky well after twilight.  Four bright planets are visible in the morning skies. From the 14th to the 16th the waning Moon climbs down the ladder of planets. Jupiter dominates the morning skies as Mars leaves Saturn behind. Mercury is just visible below the trio. 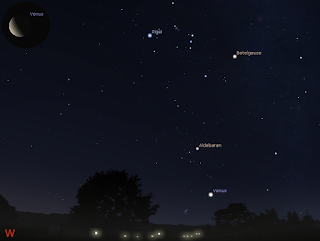 Evening sky at 18:51 ACST on Saturday, April 11 (60 minutes after sunset) looking west as seen from Adelaide. Venus is prominent in the sky above the iconic Pleiades cluster. The inset shows the telescope view of Venus. 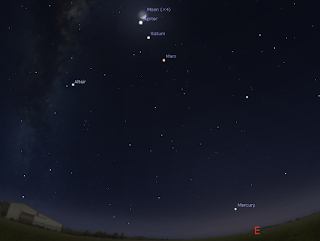 Four bright planets are dominating the morning skies. Jupiter, Saturn and Mars with Mercury is bright below.The moon is close to Jupiter in the line-up 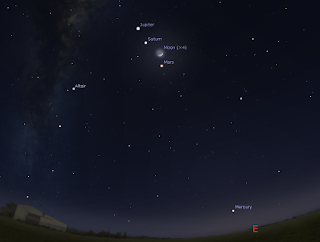 The Moon is now between Saturn and Mars in the line-up.


Venus is prominent above the western horizon in the early evening sky. Venus is readily seen up to 90 minutes after sunset and will be at greatest brilliance next week. Venus is above the beautiful Pleiades cluster early in the week, and will move away from it during the week.

Four bright planets grace the morning sky. On the mornings of the 14th, 15th and 16th the waning Moon joins the line-up, making an attractive sight.

Mercury is still visible in the early twilight, but is rapidly sinking towards the horizon.

Mars is visible high in the morning sky. Mars is leaving the pair of  Saturn and Jupiter behind. The Moon is between Saturn and Mars on the 16th.

Jupiter climbs higher in the morning sky, moving away from Mars. Jupiter and Saturn stay around a hand-span apart during the week.The Moon is close to Jupiter on the 15th.

Saturn climbs higher in the morning sky below Jupiter drawing away from Mars. The Moon is between Saturn and Mars on the 16th.