The Full Moon is Tuesday, March 10. This is a Perigee Moon. Venus is prominent in the evening sky well after twilight on the 8th and 9th Venus is close to Uranus. By midweek four bright planets will be visible in the morning skies. Mars heads towards Jupiter with  Saturn below. Mercury is low to the horizon. The Red Giant star Betelgeuse in Orion is still dim but seems to be brightening.

The Full Moon is Tuesday, March 10. This is a Perigee Moon, full Moon is 4am and Perigee is 4pm, but the Moon will still be big when it rises. Next months perigee Moon is better but this is still a good one. 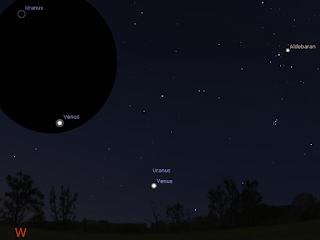 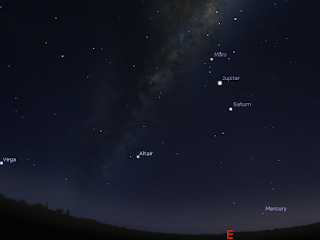 Four bright planets are dominating the morning skies. Mars is at its closest to the globular cluster M22 at this time. The inset is the telescopic view through a 24 mm eyepiece of a 4" Newtonian. Jupiter is well above the horizon and Saturn appears below it.

Similar views will be seen elsewhere in Australia at the equivalent local time (60 minutes minutes before sunrise) . 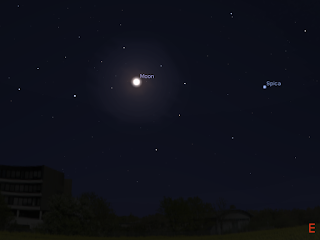 Looking north-east after Full Moon on Tuesday, 10 February at 23:00 ACDST (strictly Full Moon is at 4:00 ACDST and Perigee at 16:00). The Full Moon is a perigee Moon when the Full Moon is closest to the Earth. This is not as good as the April 8 perigee Moon but is still very good. Don't look just at moon rise as the horizon illusion will make the Moon look bigger than it is, wait until it is a decent way above the horizon. The size contrast will be best when comparing to the October 31/November 1 apogee Moon. 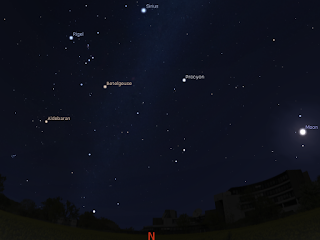 Evening sky looking north at 21:09 ACDST on Saturday, Saturday, March 7. (90 minutes after sunset). Similar views will be seen elsewhere in Australia at the equivalent local time. Orion is readily visible. Betelgeuse is the bright red star below the "saucepan" of Orion. Red Aldebaran is almost the same height above the horizon as red Betelgeuse, making brightness comparisons easy.

Betelgeuse has dimmed substantially and reached a minimum of around magnitude 1.6, but is now brightening again and is about magnitude 1.4. It is still visibly dimmer than magnitude 1 Aldebaran and roughly as bright as Bellatrix. The next brightest star just to the north of Betelgeuse. Keep an eye on this historic dimming event, observing hints and stars for magnitude estimation are given here. The waxing/full moon will interfere with estimates of  Betelgeuses' brightness during the week.

Venus is prominent above the western horizon in the early evening sky. Venus is now readily seen up to 90 minutes after sunset. Venus is close to dim Uranus on the 8th and the 9th. Although too dim to be seen with the unaided eye in the twilight, Uranus should be readily visible in binoculars, although Venuses glare may interfere.