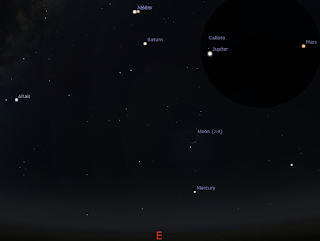 
The March edition of Southern Skywatch is now up.

From mid month four bright planets will be seen in the morning sky, the moon traces down this ladder of planets, with an excellent massing on the 19th.

Mercury enters the dawn sky later in the month, this is an excellent time to view mercury in the morning.

Mars comes close to Jupiter on the 21st.