The Last Quarter Moon is Monday October 21.  Venus and Mercury climb higher in the evening twilight. Jupiter is easily visible as the brightest object in the western evening skies. Saturn is near Jupiter, is high in the north-western evening skies.The Orionid meteor shower peaks 21-22 October, the Variable star Mira peaks in brightness around 24 October. 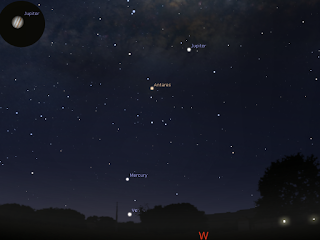 The left upper insert shows the telescopic view of Jupiter at 20:54. 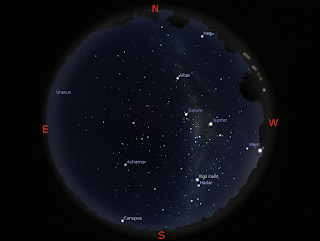 The whole sky at 20:30 ACDST on Saturday 19 October. (60 minutes after sunset) as seen from Adelaide.4 bright planets and Antares form a line in the evening sky.


Similar views will be seen elsewhere in Australia at the equivalent local time (30 minutes after sunset), click to embiggen. 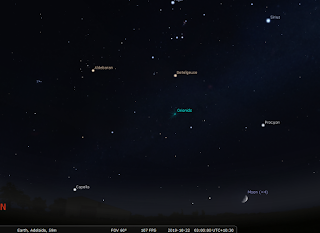 Morning sky facing north-east at 3:00 pm ACDST as seen from Adelaide on 22 October, the Orionid radiant is indicated with a star burst.

The Orionids are a worthwhile shower, best seen between 2-4 am, the radiant being just under Betelgeuse, the bright red star in Orion. This year the Last Quarter Moon will reduce rates. The best viewing is the mornings of the 21st and 22nd, when between 3-5 am under dark skies you should see about a meteor every 5 minutes. 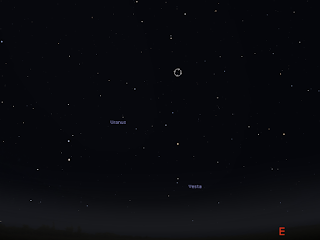 Cetus looking north-west at 10:00 pm ACDST on 24 October, Mira is indicated by the circle.
Mira (omicron ceti), a star in the constellation of Cetus the whale, is a long period pulsating red giant and changes brightness from below naked eye visibility to a peak of round magnitude 2 (roughly as bright as beta Crucis in the Southern Cross) in around 330 days.

Mira is predicted to peak with maximum of 3.4 around 24 October. Mira may be seen above the north-eastern horizon from around 10 pm local time. Mira is currently visible just to the unaided eye and will brighten noticeably over October.

Mercury is climbing higher above the western horizon in the evening twilight and is at its higest on the 20th.  Mercury is visible for at least an hour after sunset an may be seen into full darkness.