The First Quarter Moon is Tuesday July 9. Mars is visible low in the evening twilight with Mercury above it.  On July 4 the thin crescent Moon is close to Mars, forming a triangle with Mercury. Jupiter is easily visible as the brightest object in the evening skies. Mercury falls back towards the horizon and is close to Mars on the 8th. Saturn climbs higher in the late evening skies and is at opposition on the 10th.  Venus is lost in the twilight glow.

The First Quarter Moon is Tuesday July 9.The Moon is at perigee, when it is closest to Earth, on the 5th. 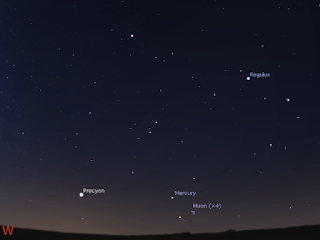 Evening sky on Thursday, July 4  as seen looking north-west from Adelaide at 18:12 ACST (60 minutes after sunset). Mars is close to the thin crescent Moon, making a triangle with Mercury. 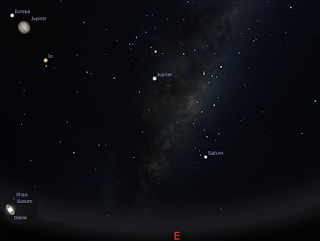 Sky at 20:00 ACST on Wednesday, July 10 looking east as seen from Adelaide. Jupiter is just after opposition, and high above the eastern horizon with Saturn below. Saturn is at opposition on this date.

Mercury  sinks towards the horizon in the evening twilight, heading towards Mars, but is still best seen with a level, clear horizon. On July 4 Mercury makes a thin triangle with Mars and the thin crescent Moon. On the 8th Mars and Mercury are at their closest.

Jupiter  Jupiter was  at opposition, when it was biggest and brightest as seen from Earth, on June the 11th. However it is well worth observing for some time after opposition. Jupiter is easily visible as the brightest object in the north-eastern/northern sky (aside from the Moon) and is located just below the distinctive constellation of Scorpius and the bright red star Antares. It is visible all evening long and is a good telescope target in the evening, being highest above the northern horizon around 10:30 pm local time.

Mars is in Cancer below brighter Mercury, during the week Mercury comes closer to Mars  being closest on the 8th. On July 4 Mars is close to the thin crescent Moon, making a triangle with Mercury. Mars and the Moon will be visible together in wide field telescopic eyepieces if your scope can poit close to the horizon.

Saturn  climbs higher in the evening sky, and is at opposition on the 10th, when it is visible all night long. Saturn is below Jupiter and just below the "handle" of the "teapot of Sagittarius. It is best for telescopic viewing from just around 9 pm local time until the early morning and is highest above the northern horizon, when it is idea for telescopic imaging, shortly after midnight.