My images of the July 28 Total Lunar Eclipse


My alarm went off a 3:30 am as planned. The sky was achingly clear, I had everything planned. Observing clothes out, lenses already set out, I had practised setting up the mobile phone on the mobile phone telescope adapter I had bought just for this.

As I got the scope out and set it up I could see the penumbral shadow creeping over the moon. The the motor drive wouldn't track! By the time I gave up and settled for imaging untracked shots a substantial divot had been taken out of the Moon (as  seen in the top left hand shot, which is the first image I got).

The Mobile phone adaptor worked like a dream. I took images at 5 minute intervals (more or less, depending on where I was making a cuppa or not) as I watched earth's shadow creep over. As the moon as more and more consumed by shadow, I started playing around with different exposure times and ASA values to try and bring out both the illuminated and eclipsed Moon. Taking images with the phone allowed me to send them to the internet in real time as well.

Then the last sliver of illuminated Moon vanished and we had totality...AANNND I had to move my carefully aligned scope. as the Moon went behind the roof.

Scope set up again I paused to take in the awesome burnished disk that was the Moon. The sky was dark again and the night hushed. The MiddleOne's friend who was staying over came out (he had accidentally left on his work alarm, both my kids stayed in bed even though I asked them to come out).

Then my firnd Steve and his son turned up.  I showed them the eclipsed Moon through the scope via the Mobile (makes it much easier to show people things). Ruddy Mars was a brilliant counterpoint to the copper Moon. Even though the Moon was eclipsed, its show  did not stop. As it headed into the central part of Earth's shadow it got darker still becoming a dark grey colour. Then as it moved out of the deepest Shadow the sky began to pale as twilight advanced.. AND I had to move my scope AGAIN as rooves interfered (should have set up in my third spot first).


The others went off to their beds again and I took my camera and decamped to the beach for the the International Space Staiton Pass and the finale. Got down the end of the road and set up, the sky paled and the Moon faded as it headed towards the sea. Right on time the ISS appeared and began to glide above the eclipsed Moon, pale against the twilight sky but still visible, and Mars.

Unfortunately I had the exposure time too long for the conditions, so the Moon Mars and ISS are a bit washed out, so I had to do a quick exposure change during the ISS shots, so my ISS sequence isn't the best, but boy did it look great when I was watching it.


And the the Earth's shadow finally slipped off the Moon, the pathc of Moon was still plae against the brightening sky but still brighter tha the eclipsed portion. Eveni=ually the waxin crescent slipped behind the marine layer, and my eclipse was over. 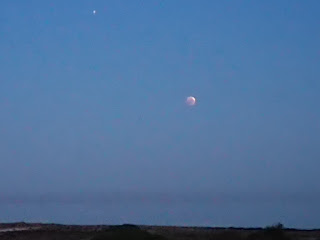 Then  I went home, packed up the scopes, had a quick look at others photos and went to bed (well, the sofa so I didn't disturb my Beloved Life Partner) for a quick snooze, the grand adventure finished.

Comments:
Hi Ian,
Love your work , which mobile phone telescope adapter do you use?