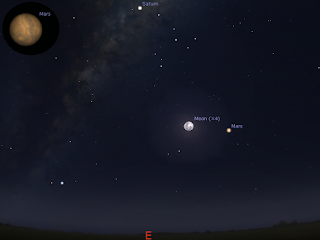 Evening sky on Friday June 27 looking east  as seen from Adelaide at 18:59 ACST (90 minutes after sunset).  Mars is at opposition, when it is biggest and brightest as seen from Earth. This is the best opposition since 2003. Saturn and Mars are clearly visible and the Moon is near Mars.

The inset to the left is a simulated telescopic view of Mars.

Just a reminder that the opposition of Mars is tomorrow night (Friday 27 July). This is the best opposition of Mars since 2003. You don't need a telescope or complicated imaging equipment to observe Mars, although a telescope helps. Even a small telescope should pick out the polar cap and the dark markings on Mars, now that the global dust storm has abated. Significant improvements in mobile phones means you can now image Mars with your mobile Phone and a telescope. Mars is really bright now, and will get brighter. To prepare you for this significant event, I have prepared this guide of observing the opposition of Mars with spotting guides and observing hints. If you stay up into the early morning of Saturday you can watch the best total lunar eclipse this century, and may even catch an International Space Station Pass.

If you do miss the opposition tomorrow night, don't worrk, Mars will still be big and brigh for several weeks after.