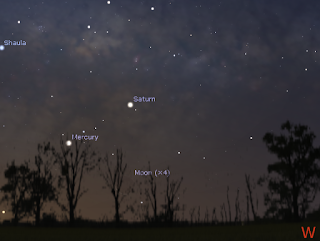 Evening sky as seen on November 20, 50 minutes after sunset. The crescent Moon is close to Mercury and forms a triangle with Saturn. Similar views will be seen elsewhere in Australia at the equivalent local time. (click to embiggen).

The November edition of Southern Skywatch is  now up.

This month features speedy Mercury visiting some bright stars and Saturn.   Mars climbs higher in the morning sky and Venus is lost to view.

Mercury climbs higher the evening sky this month and is very good viewing. It is close to Delta Scorii on the7th, Antares on the 13th, the Moon on the 20th Saturn on the 28th.

Jupiter is lost to view.

Venus gets lower in the  morning sky this month. The crescent Moon is close to Venus and Jupiter on the 18th, But this is very difficult to see. Venus is also lost to view by the end of the month.

The Leonid meteor shower is active towards the middle of the month, with the best (but low) rates in the early morning of the 17th to 18th.