The New Moon is Friday, October 20. Jupiter is lost in the twilight.  Mercury returns low in the evening twilight, and is near the Moon on the 21st. Saturn is visible most of the evening in the heart of the Milky Way. Saturn is visited by the Moon on the 24th . Venus is now very low in  the morning twilight while Mars rises higher. Orionid meteor shower peaks on the mornings of the 21st and 22nd.

The New Moon is Friday, October 20. The moon is at apogee, when it is furthest from the Earth, on the 25th. 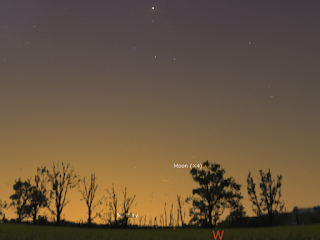 Evening sky on Saturday October 21 looking north-west as seen from Adelaide at 20:01 ACDST  (30 minutes after sunset). Mercury is very low above the horizon in the twilight with the thin crescent Moon nearby.

Mercury is setting in early evening and is above the western horizon in the twilight. You will need a clear level horizon to see it, although by the end of the week it is more prominent. On the 21st the thin crescent Moon is near mercury. 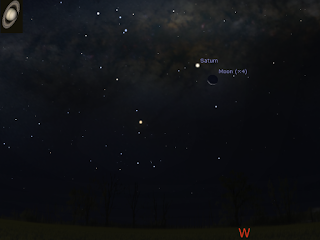 Evening sky on Tuesday October 24 looking west as seen from Adelaide at 21:05 ACDST, 90 minutes after sunset.

Saturn was  at opposition on June the 15th, when it was biggest and brightest in the sky as seen from earth. Saturn is visible all evening long. Saturn is a good telescopic target from 9:00 pm daylight saving time until around  9:30 pm daylight saving time. It is poised next to the dark rifts in the Milky Way and is in a good area for binocular hunting. Although still high in the early evening sky, Saturn begins to sink into the western evening skies as the week progresses.  Saturn's rings are visible even in small telescopes and are always good to view. Saturn is close to the crescent Moon on the 24th. 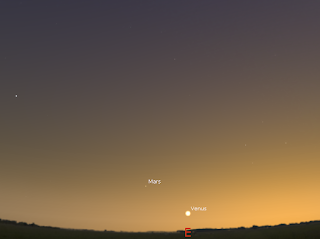 Morning sky on  Saturday October 21 looking east as seen from Adelaide at 6:00 ACDST (30 minutes before sunrise). Venus is bright just above the horizon and forms a line with Mars.

Venus  is lowering in the morning sky. This week Venus forms a line with  Mars. It is becoming much harder to see Venus in the early twilight, and you will need a clear unobstructed horizon to see the pair low in the twilight.

Mars is climbing higher the twilight, but sound be reasonably visible this week. 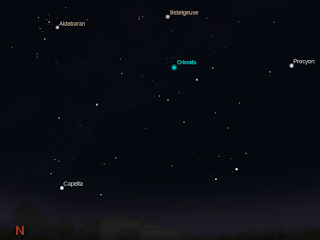 The location of the Orionid meteor radiant (starburst) as seen looking north-east at 3:00 am October 23 local daylight saving time from Adelaide. Similar views will be seen at equivalent local times elsewhere.

The Orionid Meteor shower peaks on October 21  in Australia, the radiant for the Orionids rises around  2 am on October 22, with the best meteor viewing being between 3:00 am and 4:00 am. You can expect to see roughly a meteor every 5 minutes or so under dark skies.

You can use the Meteor Flux Estimator to predict the number of meteors you might see at your location. Choose 8 Orionids, and make sure the date is 2017 and you have DST on if you are in daylight saving zones.