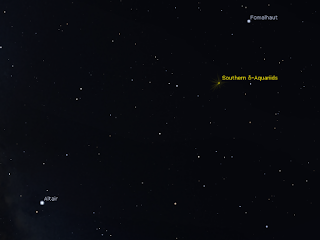 At 10 pm, face east, and look 4 hand spans and two finger widths above the horizon. One finger width right is the 4th magnitude star delta Aquarii. The radiant is just above this star. This meteor shower should be visible from 10.00 pm until dawn. The Moon will interfere until around mdinght, just after it sets.  The best rates will be at 2 am in the morning of the 30th. The radiant will be due north then, and close to the Zenith near the bright star Fomalhaut.

The sky will also be particularly beautiful, with the Milky Way stretching over the sky and constellation of Scorpius and Saturn gracing the western sky, And Venus rising in the eastern morning sky. 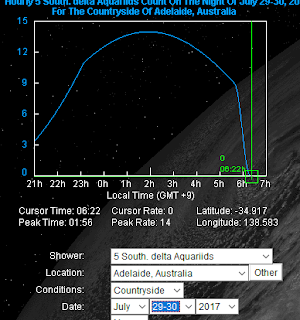 Use the NASA  meteor shower flux estimator for an estimate of what the shower will be like from your location. Unfortunately, both Chrome and Firefox have changed their security settings to prevent plugins from running, and the flux estimator only runs under Internet Explorer now. You need to choose 5 Southern Delta Aquariids and remember to set the date to 29-30 July or 30-31 July 2017