The First Quarter Moon is Thursday June 1. Mars is lost in the twilight. Jupiter and the bright star Spica are nearby in the evening sky and are visited by the Moon on the 4th. Saturn is in the evening sky in the heart of the Milky Way. Venus climbs higher in the morning sky, with Mercury below it.  Venus is close to Uranus on the 3rd and 4th. Comet C/2015 V2 Johnson may be visible in binoculars in the northern sky. 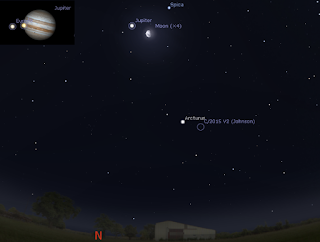 Evening sky on Sunday June 4 looking north as seen from Adelaide at 20:18 ACST (when Jupiter is highest in the sky).  Jupiter is above the horizon between the bright star Spica and the relatively bright star Porrima, with the Mon making a triangle with the pair. Jupiter is now closer to Porrima than Spica. The inset shows the telescopic view of Jupiter at 18:00 ACST of Friday June 3.

Comet C/2015 V2 is moderately high above the horizon near Arcturus.

Jupiter is rising before dusk and is now reasonably high above the horizon in the early evening this week. It is in between the bright star Spica, the brightest star in the constellation of Virgo, and the relatively bright star Porrima. Jupiter is now closer to Porrima than Spica. On the 4th the waxing Moon forms a triangle with Jupiter and Spica.

Opposition, when Jupiter is biggest and brightest as seen from Earth, was on April the 8th. Jupiter is rising before the sun sets and is visible until the early morning. Jupiter is a good telescopic target from astronomical twilight on, and the dance of its Moons is visible even in binoculars. The following Jupiter events are in AEST. 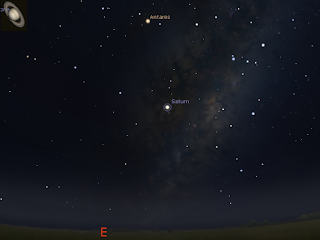 Evening  sky on Saturday June 3 looking east as seen from Adelaide at 20:00 ACST.  Saturn is reasonably high above the horizon.

Saturn is at opposition next week, but watching the rings over the coming week should see them brighten ahead of the planet,

Comet C/2015 V2 is in a good position to view at the moment, it is dimmer than predicted at around magnitude 8, while with good binoculars and under dark skies it should be visible as a fuzzy dot. The bright star Arcturus is readily visible and you can star hop from it down to the comet. For more details off how to view the comet see here. 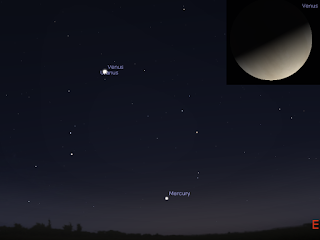 Morning sky on Saturday June 3 looking east as seen from Adelaide at 6:17 ACST (60 minutes before sunrise). Venus is dazzling and Mercury is prominent below it. Uranus is close to Venus. The inset shows the telescopic view of Venus at this time.

Venus  climbs higher in the morning sky and is visible in telescopes as a "half-Moon". Over the next few days Uranus comes close to Venus and is closest on the 3rd and 4th. Blue-green Uranus will be easily visible in binoculars as it draw close to brilliant Venus. Uranus, Venus and the brightish star omicron Pisces from a triangle, and you can watch Uranus move from day to day.

Mercury is easily visible low to the horizon.