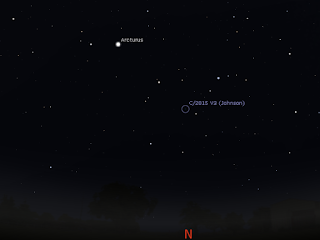 Comet C/2015 V2 (Johnson) as seen from Adelaide at 23:24 ACST, when it is at its highest above the horizon. Similar views will be seen from elsewhere in Australia at the same equivalent local time. (click to embiggen)

Comet C/2015 V2 is a comet predicted to get at least binocular bright in the next few week. Im Australia, it has only just crept high enough in the sky to be decent viewing in Australia.

The comet is currently passing through Bootes, the Herder, in the northern sky. As the week couse onit will climb higher in the sky, making it easier to see. It is best to look around 23:30 local time, when the comet will be at its highest above the horizon murk.

The comet has been reported around magnitude 8, which shloud be just visible with 10x50 binolculars or better under dark skies. I have seen a recent report of it being magnitude 7, wich is comfortable binocular level. 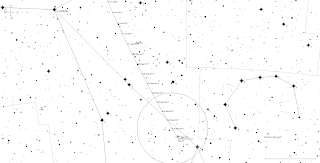 Black and white printable chart for Comet C/2015 V2 (Johnson) showing the track of the comet for the rest of the month. The orientation is the same as for the map above. The circle is the approximate filed of view of 10x50 binoculars. Use Arcturus, present on both maps, to orient yourself. Similar views will be seen elsewhere in Australia, click to embiggen.

The comet should be relatively easy to find as a tiny fuzzy blob if you star hop down from Arturus towards the horizon via  epsilon (𝛜) Bootes (see map), the next brightest star sweeping down diagonally from Arturus. Contiue on towards the next brightest star, delta (𝝳) Bootes. For this week the comet will be between epsilon and delta Bootes, by the end of the week the comet will be to the right of epsilon (𝛜) Bootes. During this time the comet should be brightening slightly (and be easiler to see being bhigher above the horizon.

The comet should be readily visible in small telescopes.