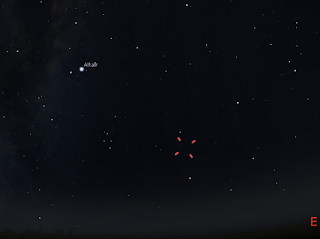 Location of comet C/2017 Lovejoy as seen from Adelaide at 6:03 ACDST ( an hour and a half before sunrise) looking north-east. Similar views will be seen form elsewhere in Australia (and most of the southern hemisphere) at equivalent local times. Click to embiggen

Comet C/2017 E4 Lovejoy is Terry Lovejoy's sixth comet. Terry's comets always seem to bring a bit of excitement and this one is no exception.

Comet C/2017 E4 Lovejoy has been brightening rapidly, and now appears to be in outburst with reports coming in of magnitudes around 7.2 - 7.5, theoretically easily visible in good binoculars. 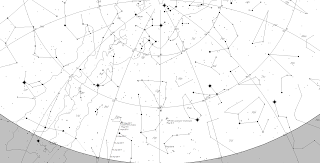 Unfortunately the comet is very low above the northern horizon, and will rapidly disappear, becoming unobservable after  April 6 or so.

So the next few mornings will be the best time to see this comet from the southern hemisphere (it doesn't return to our skies until after it has faded considerably).

There are a few good guides to the comet. Bright Altair, flanked by its two attendant stars, is very obvious well above the north-eastern  horizon, sweeping down east is the recognisable diamond shape of the constellation Delphinus, sweeping further east and down again the brightest visible star you next encounter is epsilon Pegasi. 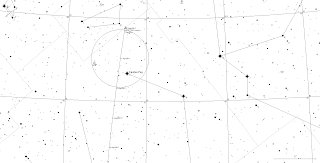 Black and white printable binocular chart for comet C/2017 Lovejoy. Use in conjunction with the charts above. The circle if the approximate field of view of 10x50 binoculars. Click to embigen and print.

The comet is within a binocular field of epsilon Pegasi for the next three mornings, after that sweeping down from epsilon Pegasi should pick it up. Depending on how bright the comet gets it may be visible into nautical twilight (and hour before sunrise). Happy comet hunting.