Proxima Centauri b, The Exoplanet Next Door 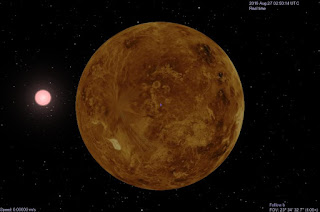 Proxima Centauri b as visualised in Celestia. I have used a Venus surface for the visualisation as it is close to the inner edge of the habitable zone, but if it has no or a thin atmosphere it may very well be an ice world. Click to embiggen.

When I was in high school (mumble) years ago, our zoology teacher was a bit of a science fiction buff,  which gave her extra credit points in the eyes of a science fiction loving teenager. She set us one assignment to write about organisms on a tidally locked world. A key intersection of my twin loves of biology and astronomy, I turned in a fairly ummm...average assignment none the less, about burrowing animals on the dessert like sunny side of the world (I didn't think much about the atmospherics and hot pole/cold pole heat transfer).

This was all brought back by the announcement of a planet orbiting Proxima Centauri. Proxima Centauri is part of the triple star system Alpha Centauri. Alpha A and B are orange sun-like stars, but Proxima is a red dwarf orbiting somewhat distant from the other two.


The planet around Proxima is both "earth-like" and in the habitable zone. This is particularly exciting. Proxima is only 4.26 light years away, so in principle future instruments might be able to resolve it. If we are really lucky, the planet will transit its sun, so we can get some ideas about its diameter and atmosphere without new instruments.

As well, Proxima Centauri is the closest star to us, only a hop skip and a jump galactically speaking. To be sure, the technical challenge is enormous. Our current speediest spacecraft, Voyager 1 and New Horizons, woul take on the order of 8,000 years to get there. These craft travel at only around 0.005% of the speed of light, a recent proposal for a fleet of "starchips"; postage sized spacecraft carried on light salis, could reach 20% of light speed and get to Proxima b in a lifetime (including development).

The challenges of such a spacecraft are enormous, but not insurmountable. It will be very interesting to see what the next decade brings.

"Earth like" merely means it is small and rocky, "habitable zone measn nothing more than it is in the region around the star that liquid water can possibly exist on. But as a reminder, both Venus (searing hell) and Mars (frozen wasteland) are also (just) in the Sun's habitable zone. Whether liquid water exists on the world depends on if it has an atmosphere, and how dense it is. The occasional flares from the star, more powerful than our solar flares, will be a challenge to atmospheric stability, let alone life.

I have as usual made a Celestia file for the system. Original paper here. Copy the data here to a plain text file (Proximab.ssc) and copy the file to the Celestia extras folder.

Also the earlier history of said red dwarf would have been very flash/bang with lots of x-ray flares, making development of lifeforms somewhat difficult, so I'm not expecting LGM