The New Moon is Tuesday February 9. Jupiter is visible in the late evening sky. All five bright planets; Jupiter, Mars, Venus, Saturn and Mercury form a long line in the morning sky.  The Moon is close to Saturn on the 4th, Venus on the 6th and Mercury on the 7th. Saturn  is close to the red star Antares.

The New Moon is Tuesday February 9. The Moon is at perigee, when it is closest to the Earth, on Thursday 11 February. 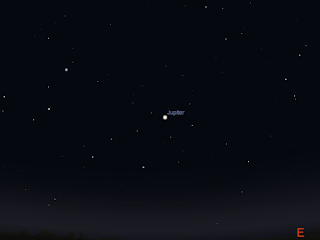 Evening sky on Saturday February 6 looking east as seen from Adelaide at 23:55 ACDST. Jupiter is above the horizon shortly before midnight. Similar views will be seen elsewhere in Australia at the equivalent local time. (click to embiggen). 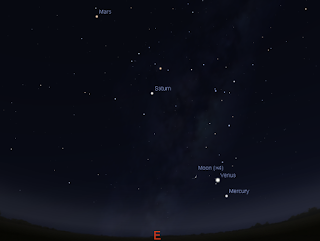 Early morning sky on  Saturday February 6 looking east as seen from Adelaide at 5:30 ACDST showing Mars, Saturn with the red star Antares close by, Venus and Mercury with the crescent Moon nearby.  Similar views will be seen elsewhere in Australia at the equivalent local time. (click to embiggen).

Mars is higher in the morning skies and is readily visible in the pre twilight dark. Mars starts the week close to the bright star alpha2 Librae, Zubenelgenubi, and slowly draws away as it heads towards the head of the Scorpion..

Venus is easy to see in the morning twilight. It is a  distinct "gibbous Moon" shape and is nice in a small telescope. Venus stars the week (just) within binocular distance of  the bright globular cluster M22. It moves away after this. On the 6th Venus is now within less than a hand-span of Mercury, and the pair remain close for the next couple of weeks. On the 6th the crescent Moon, Venus and Mercury form a broad triangle, with the Moon closest to Venus.

Mercury is low in the morning twilight. It climbs higher in the twilight sky, brightening and coming closer to Venus. On the 6th Mercury and Venus  are within less than a hand-span of Mercury, and the pair remain close for the next couple of weeks. On the 7th the thin crescent Moon, Venus and Mercury form a triangle, with the Moon closest to Mercury.

This week all five of the bright planets are visible in the morning sky, the first time this has happened for 10 years. Saturn and the red star Antares are close. During the week Venus moves through the "handle" of the teapot of Sagittarius..  Mercury climbs higher and comes closer to Venus. The Moon visits Saturn, Venus and Mercury in turn this week.