The First Quarter Moon is Monday February 15. The Moon is at perigee, when it is closest to the Earth, on Thursday 11 February. 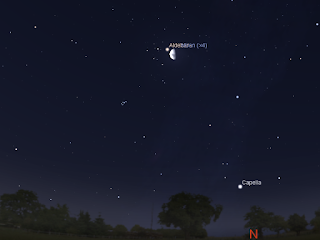 Evening sky on Tuesday February 16 looking North as seen from Adelaide at 21:30 ACDST. The Moon is just a finger-width from the red star Aldebaran. Similar views will be seen elsewhere in Australia at the equivalent local time. (click to embiggen).


On the 16th the Moon is close to the bright red star Aldebaran. It is less than a finger-width away in the twilight, but full away as the night wears on. 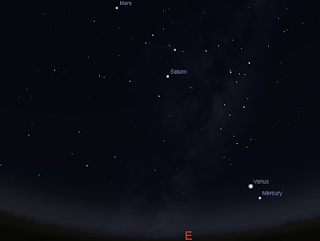 Early morning sky on  Saturday February 13 looking east as seen from Adelaide at 5:30 ACDST showing Mars, Saturn with the red star Antares close by, Venus and Mercury.  Similar views will be seen elsewhere in Australia at the equivalent local time. (click to embiggen).

Jupiter is lowering in the north-eastern morning skies and is rising before midnight.

This week all five of the bright planets are visible in the morning sky.  Saturn and the red star Antares are close. During the week Venus moves from Sagittarius to Capricornius.  Mercury is close to Venus. Between the 13th -the 17th the pair are within binocular range of the  dim globular clouster M75, but this will be difficult to see in the twilight.

Comments:
There will be a live broadcast of this event by an expedition in Palu (Indonesia). On Twitter the hashtag will be #stars4all . If you like to participate and/or get more information about the broadcast, please search for Stars4All on google, or visit the link http://www.iac.es/divulgacion.php?op1=16&id=1035&lang=en

My Images of the Crescent Moon, Venus and Mercury ...
The Crescent Moon Meets Venus and Mercury this Wee...
The Sky This Week - Thursday February 4 to Thursda...
Southern Skywatch February, 2016 edition is now out!
On the Radio Yet Again, on Nightlife
The Sky This Week - Thursday January 28 to Thursda...
A Little Light Housekeeping
Coming Events: A Year of Southern Astronomy for 2016
Southern Skywatch January, 2016 edition is now out!
All Five Bright Classical Planets Lined Up in the ...