The Full Moon is Thursday July 2. Venus is prominent in the twilight evening sky with bright Jupiter close by. The pair are closest on July 1. Saturn is in the head of the Scorpion and is easily visible in the evening. The Moon is close to Saturn on June 28. Mercury is below the bright star Aldebaran.

The Full Moon is Thursday July 2. 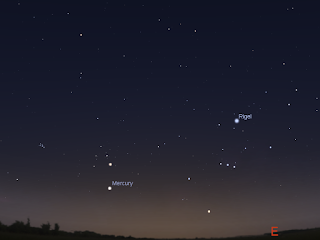 Early morning sky on Saturday June 28 looking east as seen from Adelaide at 6:30 ACST showing Mercury below the Hyades and the bright star Aldebaran. The pair are just  above the horizon. Similar views will be seen elsewhere in Australia at the equivalent local time.  (click to embiggen).

Mercury is at its highest in  the morning skies this week on the  25th, after this it sinks back towards the horizon, but is still readily visible most of this week. 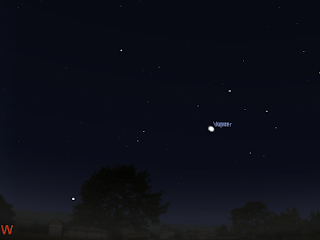 Early evening sky on Wednesday July 1 looking north-west as seen from Adelaide at 18:30 ACST showing Venus and  Jupiter lose together. 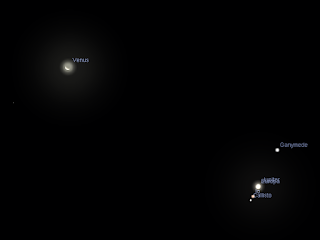 Telescopic view of Jupiter and Venus on 1 July, simulated for a 6" Newtonian with a 10 mm eyepiece. (click to embiggen)

At the start of the week Venus, Jupiter and the star Regulus in Leo form a line. Venus continues to draws closer to Jupiter during the week, being spectacularly closer on the 30th June to 2 July, when they can be covered with an outstretched finger and will fit comfortably in a low power telescope field. They are closest on July 1, when the pair are less than a finger width apart.

On the 1st, they will fit in a medium power telescope field, where the crescent Venus and banded Jupiter will be obvious.

Jupiter  is easily seen  in the early evening sky near Venus in the north-western sky as the night goes on. It is between the bright star Regulus in the sickle of Leo (this forms the head of the constellation of the  Lion) and Pollux in Cancer. It is also not far from the rather nice Beehive cluster in Cancer, and looks very good in binoculars. Jupiter and Venus are coming closer (see Venus description above). 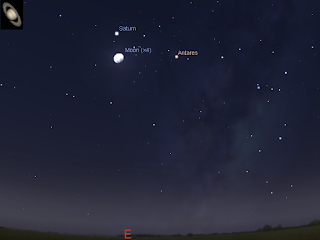 Evening sky on Saturday June 20 looking east as seen from Adelaide at 19:00 ACST.  Saturn is  easily visible above the horizon near the head of the Scorpion. The Moon is near Saturn at this time. The inset shows the telescopic view of Saturn at this time. Similar views will be seen elsewhere in Australia at the equivalent local time. (click to embiggen).

The waxing Moon is near Saturn on the 28th and 29th.