The New Moon is Monday May 18. The Moon is at perigee, when it is closest to the Earth, on the 15th. 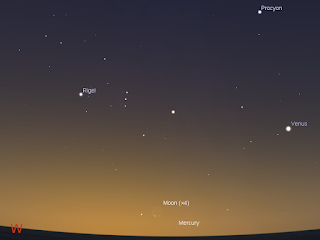 Evening sky on  Tuesday May 19 looking west as seen from Adelaide at 17:55 (5:55 pm) ACST in South Australia.  Venus is obvious in the early evening sky. Mercury is just on the horizon cloe to the crescent Moon. Similar views will be seen elsewhere at the equivalent local time (click to embiggen).

During the week Venus draws closer to the stars Castor and Pollux, heading for a meeting with Jupiter later next month. On the 21st the crescent Moon is close to Venus, forming a triangle with Venus and Pollux.

Mercury is low in the western evening sky and difficult to see in the twilight. On the 19th it and the crescent Moon are close, but you will need a flat level horizon like the ocean to see them. 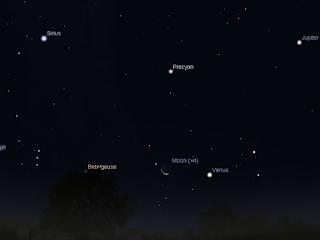 Early evening sky on Thursday May 21 looking north-west as seen from Adelaide at 18:30 ACST showing Venus, the crescent Moon and  Jupiter. Jupiter is the brightest object above the north-western horizon once Venus has set. (click to embiggen). 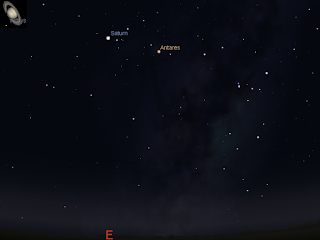 Evening sky on Saturday May 16 looking east as seen from Adelaide at 21:00 ACST.  Saturn is  easily visible above the horizon in the head of the Scorpion. The inset shows the telescopic view of Saturn at this time. (click to embiggen). 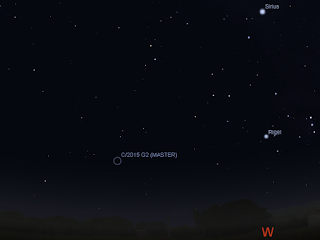 The evening sky at 18:55 (6:55 pm ACST) looking west as seen from Adelaide on 14 May.  The location of comet C/2015 G2 MASTER is shown with a circle. You will probably need binoculars to see it. Similar views will be seen elsewhere in Australia at equivalent local times. (click on image to embiggen).

Comet C/2015 G2 Master is now in the evening sky and high enough above the horizon to be readily seen. It should be around magnitude 6, just on the threshold of unaided eye visibility, but is best viewed with binoculars and telescopes. In binoculars the comet will be a fuzzy blob, and decent telescopes may show the thin tail see in astrophotographs.

The comet will move rapidly up through Lepus heading for Canis Major this week. A spotters map suitable for printing in black and white is here.