Terry Lovejoy has done it again! After C/2011 W3 Lovejoy, which was also a Christmas comet, he has found us another great comet. C/2014 Q2 Lovejoy is brightening rapidly. Currently the comet is around a full magnitude brighter than predicted, and there are multiple reliable reports that is is now (faintly) visible to the unaided eye.

There is every possibility the comet may reach magnitude 4. While it will not have the magnificent tail developed by C/2011 W3, and will only be a fuzzy dot to the unaided eye, it will be the brightest comet we will have seen in southern skies since Terry's previous Christmas comet, and you won't have to get up at 4 am to see it.


Look to the east when looking for the comet, after 10 pm the sky will be dark enough for hunting the comet. It is currently very easy to see in 10x50 binoculars as a fuzzy ball (and a snap in small telescopes).  There are lots of reasonably bright stars which you can use to star hop to the comet using the charts above (and when using the charts, don't forhe to cover your torch with red cellophane to avoid destroying your night vision). 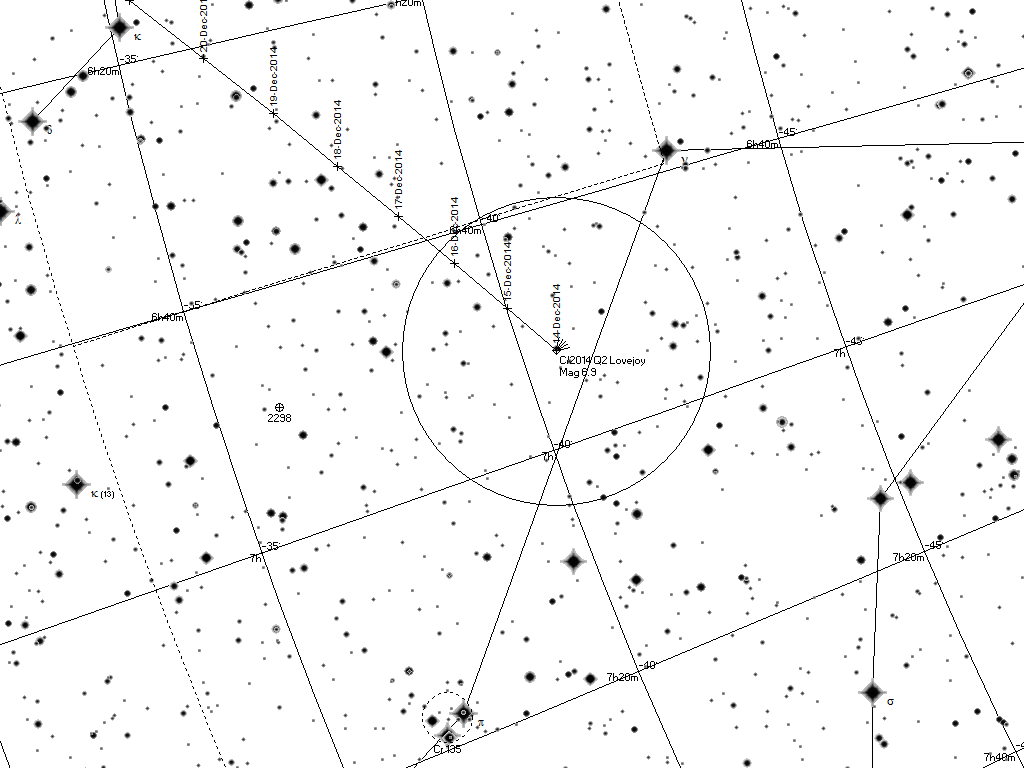 A binocular chart suitable for the next week.The comet is between Pi and Nu Puppis (see charts above to orient yourself to the stars location). Click to embiggen and print

At the moment, the comet is above the distinctive star cluster around the bright star pi Puppis (see black and white maps above). Alternatively, if you draw a line between Sirius, the brightest star in the sky, and Canopus. for the next week or so the comet will be around 2/3rd of the distance to Canopus. A little hunting around the area with binoculars will soon reveal the comet. There are lots of star clusters around the area, but none will have the fuzzy ball appearance of the comet.

When going out, allow at least 5 minutes for your eyes to adjust and become dark adapted. Here's some hints on dark adaption of your eyes so you will not be disappointed in your comet hunt. Also the later at night the darker the sky and the higher the comet will be. While it is readily visible in suburban locations (like mine, where I saw it tonight), dark sky sites are best. So if you are going camping at Christmas, go look for it!