The Last Quarter Moon is Thursday October 16. Mercury is lost to view. Mars meets comet C/2013 Siding Spring in the star clouds of Sagittarius on the 19th. Saturn is low in the evening sky. Jupiter is prominent in the morning sky and is visited by the crescent Moon on the 18th. Orionid meteor shower on the morning of the 22nd. Comet C/212 K1 Panstarrs visible in binoculars.

The Last Quarter Moon is Thursday October 16. Apogee, when the Moon is furthest from Earth, is on the 18th. 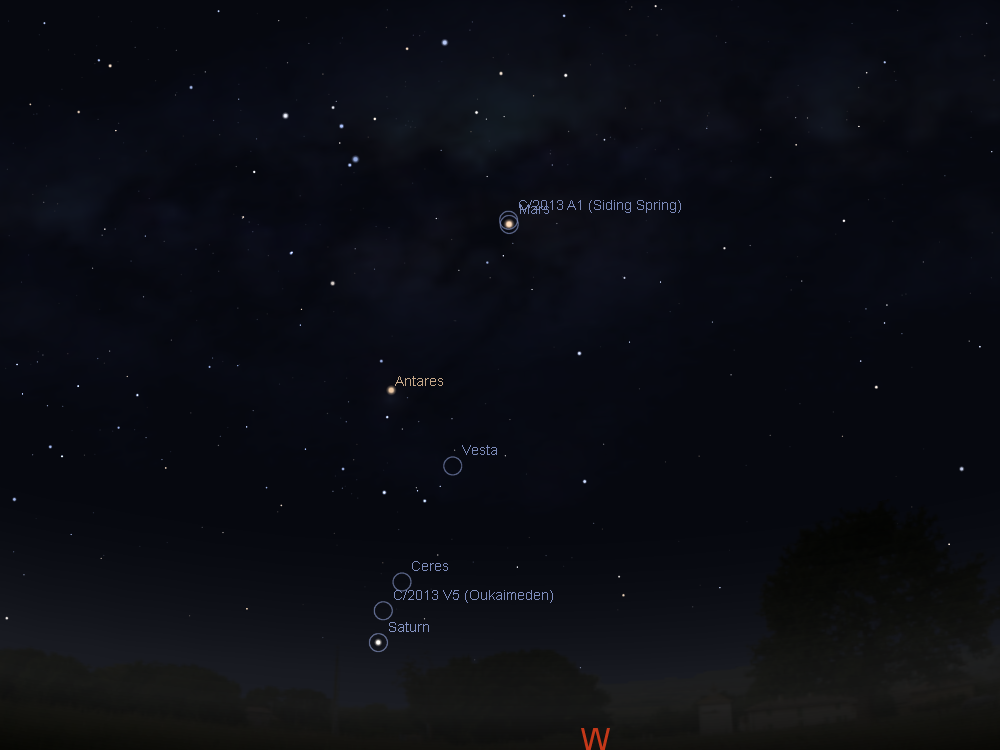 Evening sky on Sunday October 18 looking west as seen from Adelaide at 21:00 (9:00 pm) ACDST in South Australia. Mars meets the comet C/2013 A1 (Siding Spring). Saturn is under the head of  Scorpius. Comet C/2013 V5 is now in dark skies above Saturn, but is quite low to the horizon still. Similar views will be seen elsewhere at the equivalent local time (click to embiggen).


Mars  is easily seen in the western evening sky, setting around midnight. Mars was at opposition, when it is biggest and brightest, on the 9th of April, and is still  readily distinguishable as the bright red/orange object above the western horizon in the early evening.

Mars is in the constellation of  Sagittarius. Mars meets Comet C/2013 A1 Siding Spring on the 19th. Fom Australia the comet and Mars will be less than 18 arc minutes apart (less than a quarter of a finger-width apart). The comet will be closer to Mars tan the Earth is to the Moon at closest approach, and a bevy of spacecraft will be watching. Sadly, you need really serious telescopes to see the comet now, as it has faded substantially. An extensive observing guide with printable maps is here.

Comet C/2013 V5 has passed perihelion and is still surviving. It is visible in medium sized or larger telescopes (8" reflectors or larger). While it is in quite dark skies at the moment, it is still low to the horizon, and will become even more difficult as it fades and twilight encroaches. 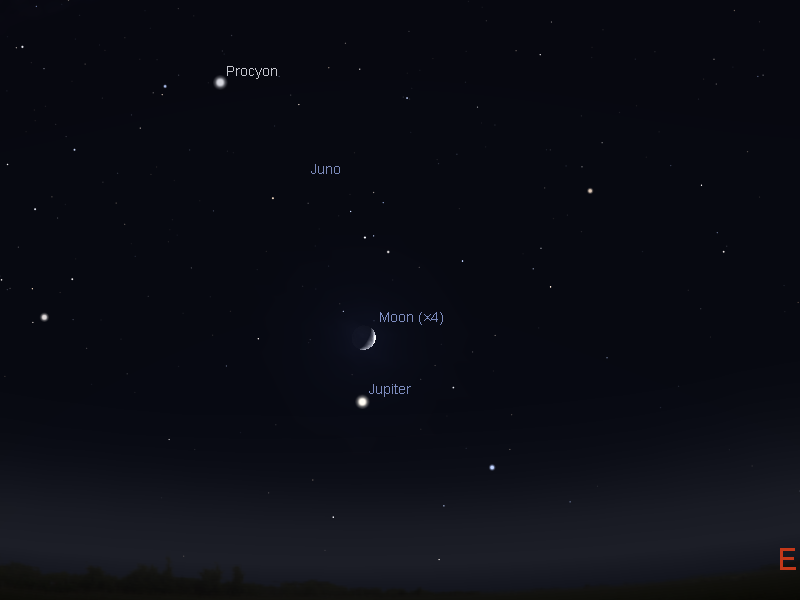 Morning sky on Saturday October 18 looking north-east as seen from Adelaide at 5:00 am ACDST.  Jupiter is above the north-east horizon. with the Moon close by (click to embiggen).

Jupiter  rises higher in the morning twilight, and now is easy to see above the horizon before twilight. During the week Jupiter climbs higher and becomes easier to see as the brightest object above the north-eastern horizon.

On 18th October the crescent Moon is just above Jupiter. 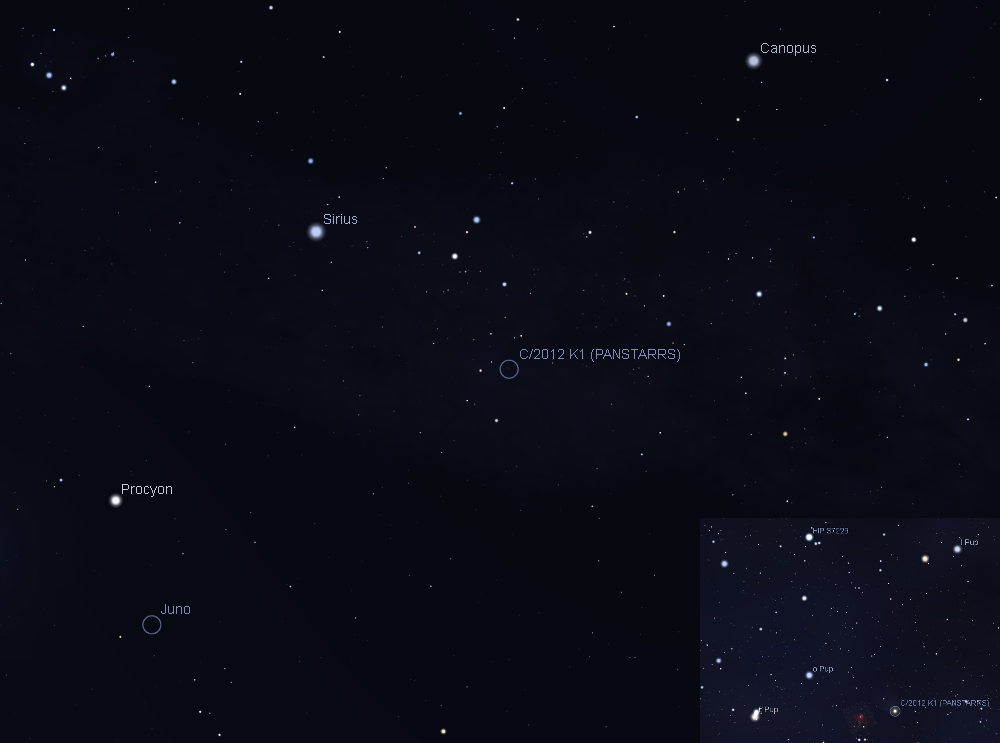 Evening sky on Thursday October 16 looking East (and up towards the zenith)  as seen from Adelaide at 5:00 (5:00 am) ACDST in South Australia. Comet C/2012 K1 Panstars is below the tail of Canis Major. The inset shows NGC 2467 and the comet as seen in binoculars. Similar views will be seen elsewhere at the equivalent local time (click to embiggen).

Comet C/2012 K1 Panstarrs is rising higher in the morning sky. At the beginning of the week it  should be visible in 10x50 binoculars as a fuzzy dot with a stubby tail. As the week goes on and the Moon wanes it should be easier to see. At magnitude 7 you will need to let your eyes adapt to darkness to see the comet clearly. On the 15th and 16th of October the comet is within binocular distance of the nice open cluster NGC 2467. 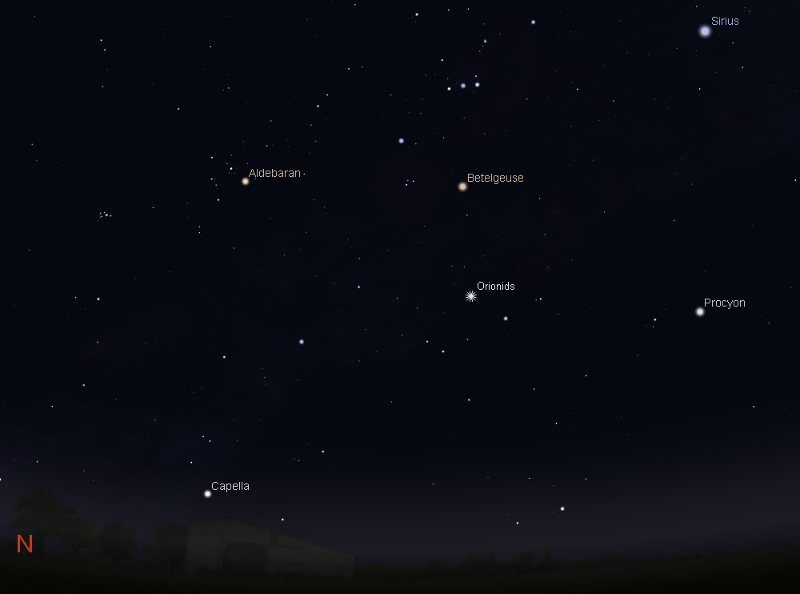 Morning sky on Monday October 22 looking north-east as seen from Adelaide at 3:00 am local daylight saving time in South Australia. The white starburst marks the position of the Orionid radiant. Similar views will be seen elsewhere at the equivalent local time (click to embiggen).

The Orionid Meteor shower peaks on the morning of October 22  in Australia, the radiant for the Orionids rises around 1 am on October 22, with the best meteor viewing being between 3:00 am and 5:00 am. You can expect to see roughly a meteor every 5 minutes or so under dark skies.

As the name suggest, the meteors will seem to originate just below Orion. Allow several minutes for your eyes to adjust to the darkness and be patient, it may take ages for a meteor to turn up, then you may see a few in a row.

You can use the Meteor Flux Estimator to predict the number of meteors you might see at your location. Choose 8 Orionids, and make sure the date is 2014 and you have DST on if you are in daylight saving zones.